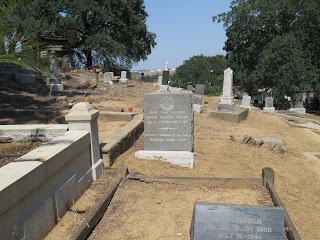 Well another attempt to gain access to the St. Catherine of Siena cemetery has failed. After having a nice walk and lunch in the historic downtown area of Martinez we decided to visit the police station to obtain the keys that would allow us to visit St. Catherine. I knew there was trouble when the officer began searching through the keys and taking way too long to find them. He came back and said that somebody must already have them. So we decided to take the keys to Alhambra just in case. Alhambra is located directly across the street from St. Catherine. Upon arrival, there was nobody in St. Catherine. So I shrugged my shoulders and we went inside Alhambra. 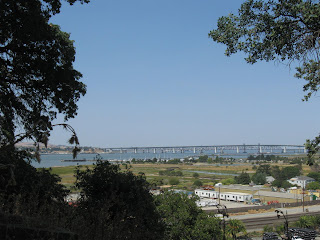 Burials at the Alhambra Pioneer Cemetery are believed to be dated back as far as 1851, however, the first recorded burials began in 1854 with the last being as late as 1999. It is possible that more deeds in the cemetery exist, however, the cemetery overseer may have sold some of the plots to more than one person. The land was originally part of the land grant given by Don Ygnacio Martinez. There is no doubt in my mind that the cemetery site was originally chosen for it's picturesque landscape at the time. Now you see a more industrialized view of what used to be a clear view of the delta. A trainyard and construction area is now located behind the cemetery. 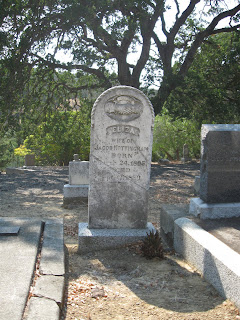 Pictured here you see the grave of Eliza Nottingham. For awhile this headstone was missing from the cemetery. I have heard several accounts of how it was found. One says that a man found it in his backyard while digging a swimming pool. Another says that it turned up in an antique shop. In any even Eliza's headstone is now back where it belongs. She was born in Kentucky and there is no information as to when or how she came to California. But Eliza is no ordinary woman. At the age of 9 she was on a family outing and rescued a 4 year old boy from drowning in a creek. That boy later grew up to become the 16th president of the United States. Yes Abraham Lincoln. What would the world be like today if it weren't for Eliza Nottingham? Sometimes the unknown pictures are worth more than the famous ones to me. I felt honored to have stood before her grave. 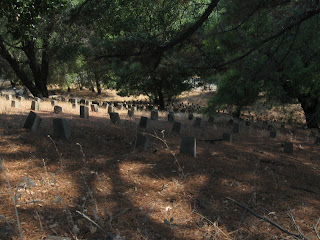 There is so much I could write about this cemetery so I'll probably end up doing individual biographies in future posts but I could not leave this post without talking about the Potter's Field. See Matthew 27:3-8 Buried within the Potter's Field are the bodies of some 600 unknown early California pioneers of Chinese, Mexican, Scottish and Irish descent. Each burial is marked by a stone with a number and is no larger than a loaf of bread. This was the only place in the cemetery where I felt a little strange. I just felt sorrow for all these people who were buried as unknowns most likely due to their lack of status. These were mothers, fathers, brothers and sisters who no doubt meant something to somebody at the time but didn't have enough money for a proper burial. All in all this was a nice trip. Since we had to get a key to get in we had the run of the cemetery by ourselves. It was a really relaxing and peaceful day and I really had fun learning all this information about this cemetery and the people buried within it's gates.
Posted by Joe Dallmann at Sunday, August 09, 2009