San Jose's Oak Hill Memorial park originally began in 1839 when people were given permission by city officials to be buried under the oak trees at the south end of town. Then in 1848 a man by the name of Chester Lymon laid out approximately 25 acres for the burial of Protestants and Catholics and 4 acres to be used as a potter's field. Which I've just learned is a burial place for strangers of sort. (see wiki) 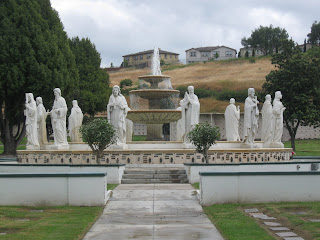 The cemetery has since been expanded to more than 300 acres. This is the oldest secular cemetery in California which makes sense because apparently San Jose is the oldest city in California as well. San Jose was incorporated in 1777 and at the time the cemetery was simply known as "The Graveyard". It wasn't until 1933 that citizens decided to rename it Oak Hill Memorial Park. Upon entry the first thing I noticed was the fountain of the 12 apostles. This is a beautiful fountain and I found it interesting how each apostle seemed to have his own unique personality captured by the artist. The individual apostle pictures can be found here. I usually drive around a cemetery before I decide where I was going to start. Today I decided to start my walk at the huge statue of Jesus at the top of the hill. 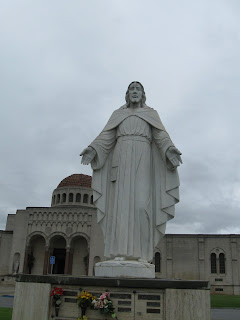 This statue towered over me. Of to his left and right stood 2 smaller yet equally beautiful statues of women kneeling and behind him a beautiful mausoleum which I did not visit because there were services going on and I didn't want to disturb anyone out of respect. On his pedestal I'd say that Jesus stood at least 30 feet high or more. I'm not too good at judging height so this is just an estimate. Behind me I could see the city of San Jose but as you can probably tell from the pictures it wasn't a very clear day and it rained a little. We didn't care though we had umbrella armed and were ready to take it on rain or shine. We had just visited the Winchester Mystery house and beforehand I had done a quick search and decided to couple in the cemetery when we were done unbeknown to my lovely girlfriend who was also excited when she found out we'd be going. 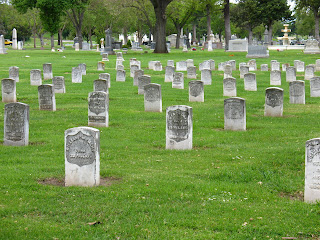 Anyway enough about that back to the cemetery. This cemetery also has a large population of Asians which adorn their graves with beautiful jade statues as well but the hardest section for me to visit in any cemetery is always the military section. Oak Hill Memorial has a section dedicated to Union Veteran's of the Civil War. This is always difficult because my brother is in the U.S. Marines and has done two tours in Iraq. I'm always thankful that he's come back each time but sections like this always remind me that not everyone does. I don't like to get emotional when I visit cemeteries but every once in awhile I see something that I didn't want to see and it makes me think about my own family and the families that have lost loved ones which is why I usually stick to the older sections.
Posted by Joe Dallmann at Tuesday, June 09, 2009