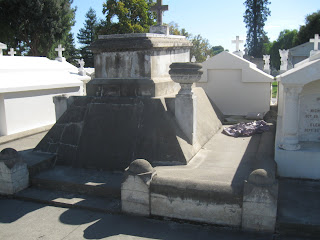 This picture was taken at the Santa Clara Mission Cemetery. When I first walked up I was more interested in the elevated casket you see toward the left. But as I looked a little closer I became interested in somebody's home made sleeping arrangements on the right. I thought to myself, hmm at least you'd mostly be blocked from the wind. But could I sleep in a cemetery? Next to someone's grave? I'm not too sure this is my cup of tea. I guess it's working for whoever has been sleeping there. I did feel a little bad that someone out there has reached such a low in their life that they'd have to sleep here. But many times I look at someone and say "Well they've made their own bed. Now they have to lie in it"
Posted by Joe Dallmann at Friday, October 30, 2009