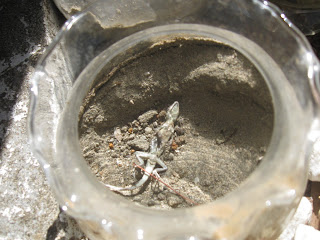 This week's thing is a tiny lizard. Yes I like lizards. But sadly this little guy climbed into the jar and once in couldn't find his way out in time. He (I use he because I'm a guy and have no way of telling the sex of a dead lizard) was probably climbing in to get a bug that had also been trapped. So with the preservation of wildlife in mind I'll be asking all the people who come to my future grave site to not leave any small jars. Also I like beer but please don't leave me beer either as I'll be deceased and unable to drink it. Instead just drink it yourself in memory of me. Also for the "homies" please don't pour any out on the ground either. I know you guys are poor and probably had to scrape up enough change just to buy it. 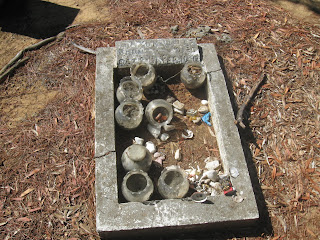 Here is a picture of what the entire grave looked like. No doubt it belonged to a child. We spent some time tidying up as it appeared that nobody had been there in quite some time. That is when I noticed the little guy in the picture above. I decided to leave him as I found him. In his final resting place, at the bottom of a jar, in the middle of Benicia City Cemetery. RIP little guy. I'm sure somewhere your lizard family misses you
Posted by Joe Dallmann at Thursday, October 22, 2009