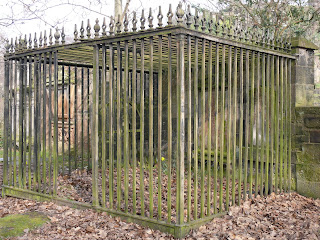 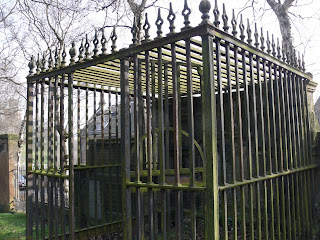 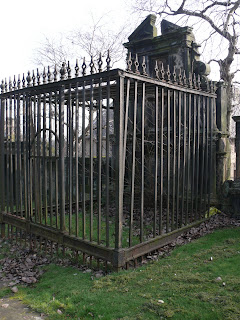 During the 17th and 18th centuries, a growing number of anatomists, keen to improve their medical knowledge, needed corpses on which to conduct dissections. Bodies were difficult to come by as it was only legal to perform a dissection on the corpse of a recently executed criminal. So body snatchers, also known as resurrection men, made money by digging up fresh corpses and selling them to medical schools and hospitals.
Poor graves were easiest to plunder, as paupers were often buried in mass graves which were left uncovered for a few weeks, until they were full of coffins. Single graves were more difficult and the body snatchers preferred method was to dig a narrow hole down to the coffin, break through the wood and pull the body out by attaching the shoulders to a rope. A body wasn’t considered anyone’s property and so could be taken, but you could be convicted of theft for taking the shroud or clothing so they were left behind.
People were so afraid of being removed from their graves that the rich paid for metal coffins, or wooden caskets bound in metal bands called ‘mort safes’. Many placed metal ‘cages’ over the graves (a few still remain in small church yards to this day.) The fresher the corpse the more money they made. When fresh corpses were in short supply, body snatchers sometimes resorted to more gruesome methods i.e. murder. In 1832, the Anatomy Act was passed, making it an offence to rob a grave. It was only legal to dissect the unclaimed bodies of people who had died in hospitals or poor houses. The act put an end to the body snatcher’s profession. However, dissection was still very unpopular, as many saw it as an act of damnation.
The most famous body snatchers were undoubtedly William Burke and William Hare, two Irish immigrants who went to Edinburgh to work as laborers. Although giving the appearance of two hard working men by day, at night they had took up the more sinister and profitable trade of grave robbing and murder. Their victims of murder were the waifs and strays from the streets of Edinburgh, people who would not be missed. By hanging around Inns they would spot potential victims and lure them to their death by strangulation (so as not to damage the corpse.) The victims of this gruesome crime were said to have been sold to anatomist Dr Knox to be dissected in the medical school.
Their final demise was due to the death of Mrs Docherty, a recent arrival in Edinburgh whom Burke befriended. Burke claimed that he was related to her and offered her food at his lodgings. Later that day Burke had asked his fellow lodgers to move out and stay elsewhere at his expense. The following morning the lodgers returned asking for Mrs Docherty and became suspicious of what was going on. They were not satisfied with Burke’s explanation and discovered Docherty’s body wrapped in straw under Burke’s bed.
It is believed that Burke and Hare were responsible for the deaths of between 13 –30 people but Burke was the only one prosecuted and then only for the murder of Mrs Docherty. William Hare turned King’s evidence against him. Burke was hanged on the 28th January 1829. No charges were ever brought against the Surgeon Dr Knox as being the recipient of the bodies for dissection within the school and William Hare is said to have died a pauper in London in 1858. In an ironic end to the story, Burke’s body was donated to the medical school for dissection. His skeleton is still on display. A small notebook was made of his skin and this is on display at the Police Museum on the Royal Mile.
Posted by Jeane Trend-Hill at Friday, December 04, 2009