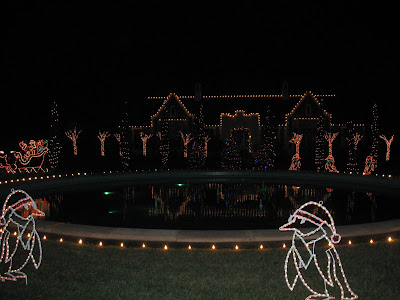 I first heard of the circle of lights from Cheryl over at Heritage Happens.
I thought to myself Christmas at the cemetery? Awesome. It turns out that much like everything I get all excited about I fail to figure out that it just says "circle of lights". I've been to Mountain View a million times and just as you enter the cemetery gates you have the main office, the Gothic Chapel, and this traffic circle that goes around a small man made pond in the middle. Hence "circle". It's not very big. So I get there and I'm a little disappointed because I walk straight past the lights and find out that the cemetery has been closed off by barricades so all I'm going to see tonight is this circle of lights. Don't get me wrong they did a great job with the lights on the main office and around the pond as you can see above. They even did a great job with the Gothic Chapel you see below. 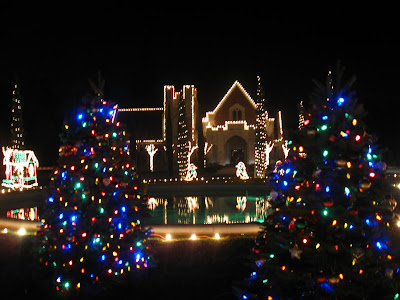 I've always wondered what a Gothic Chapel actually is. Looks like I'll have to ask the cemetery personnel but it is my understanding that it serves as a regular chapel would serve, hosting several funeral services as well as a few weddings. Now I've been married before but had no idea this existed when I got married. I think it would take a special lady to marry me in a cemetery. I'm going on record right now and saying I'm not getting married again unless these conditions are met. I get married in a cemetery, there is a little person dressed like Jimi Hendrix playing the wedding march on an electric guitar and the wedding cake will need to be made off bacon. If all these conditions are met we can proceed with nuptials. Ok back to business...sometimes those thoughts up there stay in and sometimes they squeak through the cracks. Looks like that one squeaked through. So after we got done looking at the lights we noticed security patrolling the cemetery grounds behind the barricades. So we took a stroll over to the chapel and pretended to be intrigued with the lights on it. We sneak around the back and we're in the Jewish section...allright!! 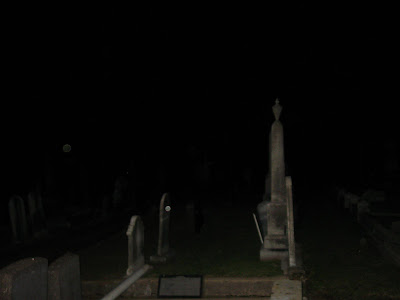 So my first night shots of Mountain View. Finally something to be excited about. Unfortunately my camera takes really crappy night photos. Please take the time to buy me the camera I want. Anyway we get home and start noticing pictures with bright and lighter colored orbs in them from the one section we could visit without security getting us. My girlfriend is all excited saying it's ghost energy etc. I say it's dust and the argument begins. She says "How could you not believe in ghosts?" and I say "Because I've never seen concrete evidence that there are ghosts." Now I'm not saying they don't exist. I'm just saying I can't really say that I have seen a ghost. I have seen things I thought were there maybe out of the corner of my eye but cannot say for sure if I saw a ghost or if something was a figment of my imagination. I'm more of a feel the energy sort of guy. But you can definitely see something in the picture above. 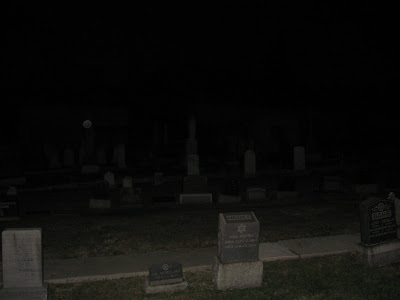 I always look for a logical explanation for something and to her it seems everything is a ghost. But in these pictures I cannot dispute that I see orbs. Now what is an orb? Is it just dust reflecting light back at the camera? Or is it a piece of energy from the other side? I guess everyone has their own opinions on it. Overall this was a fun trip and I would like to thank my kids for not being too much of a pain in the butt as Dad cruised the graveyard at night. Happy Holidays everyone...
Posted by Joe Dallmann at Saturday, December 26, 2009