Cemetery Man: Requiem For a Loner 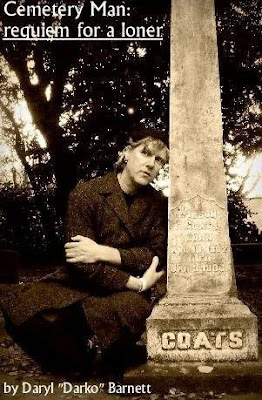 I don't normally plug books here. I leave that to the authors themselves but I've been talking to Daryl "Darko" on Facebook for quite some time and have actually gotten to know him personally. It's not something you get to do with a lot of authors. So I thought it would be a good opportunity to see how a person I feel like I know writes a book, creates a character and tells a story. Daryl offered to meet in person once the book was printed and sign a copy for me so I jumped at the chance. Through Facebook I had the opportunity to watch videos and things he posted of himself doing things like model shoots and walking cemeteries with his mother. What I saw in Daryl was what I like to refer to as eyes of wonder. It's something you see in a lot of artists or photographers. Like he saw something differently than everyone else did. I don't know how to explain it but it's one of those things you'd probably do if you saw a rainbow or something, stare at it in wonder. Daryl is one of these people. I still don't completely know him but the way he saw the world and people was interesting to me. Actually through Facebook I've had the opportunity to meet a number of people that are able to see the world like nobody else. One of them is an author here on the blog as well, Jeane. I feel like if everyone could see the world the way we do that it would be a much better place, a place of appreciation if you will, the ability to find beauty in anything and anyone.

So Daryl and I met for coffee for an hour or two and talked cemeteries and every day life etc. After we were done I immediately went home and read half the book. I found myself trying to figure out if it was an autobiography or fiction. It seemed to me that so much of Daryl had been poured into the character yet it still maintained some fiction. I ended up finishing about a week later due to work obligations. I won't give anything away but I can say that I came away with an understanding of both Daryl and the subjects he brings up. What stuck with me most was his take on religion which is always a subject of interest for me. If you'd like to pick up a copy of this book you can do so here http://www.blurb.com/books/1258853 . It's also full of great pictures of cemeteries. One of these days when I'm able to focus enough time on it I may do something along these lines as well...
Posted by Joe Dallmann at Friday, May 14, 2010