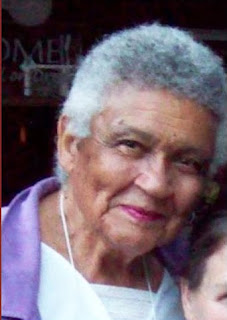 The Bay Area has lost one of its’ hardest working icons. Claudia was well known within the religious and charitable communities. Sister Killingsworth passed suddenly with the Lord blessing her with her wish. She was not sick or disabled, he simply took her home.

Claudia was one of six (6) children born to the union of Floyd and Paralee Cooley McKinney in the city of Sunflower Mississippi. She started school in a church built by her grandfather, Floyd McKinney, for the Christian Church (Disciples of Christ). She received her early education in Mississippi, Chicago Illinois completing it at Southern Christian Institute “SCI” in Edward Mississippi where she met her husband James L. Killingsworth. She and James Sr. were married for sixty-five (65) years. She and husband James, are also alumni of Jarvis Christian College, Hawkins Texas. The Alumni for Jarvis Christian College at Mills Grove Christian Church, with the home going of Claudia, leaves husband James L. Killingsworth and Doris Barrett to continue their fundraising efforts for the institute.

Claudia accepted Christ at an early age, continuing with a strong faith over the years. Sister Killingsworth and her husband James Killingsworth Sr. became Charter Members of Second Christian Church, Disciples of Christ under the organizational skills of Rev. Peter C. Washington in September of 1949. On May 2, 1954, Charter members, Rowena Washington, Emma T. Robinson, James & Claudia Killingsworth and Floyd & Maurine Ward and other members of the congregation moved the church to a new location and became known as the grove Street Christian Church under the leadership of Rev. W.D. Elder. Mills Grove Christian Church became a reality on May 18, 1975 as Mills Terrace Christian and Grove Street Christian (DOC) combined their strength under the leadership of Rev. Eugene James.

Sister Killingsworth had been a member of the Ordained Diaconate Board of Mills Grove Christian Church (DOC) for many years. Her husband James Sr. serves as an Elder. She has been instrumental in serving the religious community within her church and to other churches in need of support. She continued to actively serve until the day before she was called home.
Claudia retired from the Food Services Department of the Oakland Unified School District after thirty-one (31) years of service. She was honored with a beautiful retirement celebration for her years of dedicated service to the students, parents and the Community of Oakland, as stated in her retirement program, “Who can find a virtuous woman? For her price is far above rubies.” Proverbs 31:10

Claudia works tirelessly with the East Oakland “Edes” senior citizens’ program helping to distribute much needed food and to participate and encourage others to maintain their activities in the exercise and trips made available. She also contributed the much needed emotional support. She was known at the Senior Center and in her neighborhood to be a source of love and comfort. During her early years of marriage, she found time to be a den mother for her son’s scout troop and other work with young people. She received several awards for her work with the youth. She was the caregiver for her aunt, Viola Grubbs who resided with the family for several years.

She also served the community through her several Masonic Affiliations, Regina Chapter#67, Order of the Eastern Star; Mary Elizabeth Court, Heroines of Jericho and Menelik Court, Daughters of Isis. She held many appointed positions with the Order of the Eastern Star. She was crowned as Queen of the Golden State Grand Chapter raising one of the long standing records of the highest amount of money raised. That money was used for Scholarships, baby showers for mothers at Highland Hospital. Through her affiliations women of her projects helped to raise money for scholarships, holiday baskets of foods, baby showers as mentioned above and items which were donated to homeless individuals.

Claudia was always a very kind a giving person. She always had a smile and her favorite words were, “It will be alright” She will be truly missed in all the communities that she gave service.