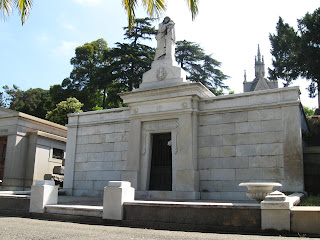 Born in 1817 to an exotic foods importer and his young wife Domenico Ghirardelli became an apprentice for a local candy maker at an early age. Attracted to South America by the possibility of prosperity Ghirardelli spent several years in both Uruguay and Lima, Peru where he engaged in the trade of chocolate and later opened a confectionary store next to that of an American cabinet maker by the name of James Lick. Interested by stories of success in North America Lick set sail for San Francisco in 1847 with 600 pounds of Ghirardelli chocolate in tow which he quickly sold. Lick then writes Ghirardelli a letter asking him to come north and bring more chocolate. In the meantime, while learning Spanish, Ghirardelli decides to drop his Italian name Domenico and take on the Spanish equivalent of Domingo. It wasn't until 1849 after the death of his first wife and the news of gold in California that Ghirardelli decided to set sail for California. After little success finding gold Ghirardelli once again becomes a merchant setting up a tent store in the city of Stockton, CA. It wasn't until a couple months later that he opened his first location in San Francisco. Ghirardelli Chocolate Factory has now been in business for over 150 years and after fires and earth quakes it now stands at 900 N. Point St. in San Francisco, CA. 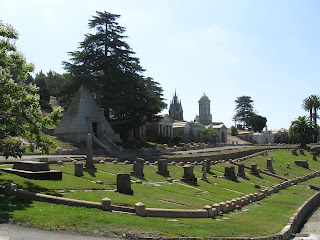 Although today Ghirardelli's mausoleum is located on Millionaires Row in Mountain View Memorial that was not always the case. It seems that the family originally had a mausoleum at the adjacent St. Mary's Catholic Cemetery. As the story goes, As a young man Ghirardelli was a supporter of Garibaldi for the unification of Italy. It seemed that Garibaldi had differences of opinion on this subject. Garibaldi was exiled to South America and was exiled in 1836. Garibaldi's exile may have shaken Ghirardelli's faith in Catholicism. Thirty years later that faith would be destroyed. Ghirardelli had a teenage niece Aurelia who became gravely ill. A priest was called to give her last rites. Family members have conflicting stories about whether there was a bad rain storm or if the priest felt Ghirardelli hadn't given the church enough financial support. So Aurelia died without being given her last rites which infuriated Domingo and devastated Ghirardelli's deeply religious wife Carmen. Ghirardelli then forbade any of his family members to ever enter a Catholic church again. With this act still weighing on him Domingo had the mausoleum you see above built at Mountain View complete with a Masonic emblem above the door which was considered inappropriate by Catholics. Once it was ready, Domingo and his two sons went to St. Mary's in the dark of night and took the 4 bodies that were at St. Mary's and laid them to rest in the newly built mausoleum.

I found that story while just researching Domingo himself. I like the whole dark of night body stealing. I can't find any hard evidence that Ghirardelli was a freemason but an interesting story nonetheless...
Posted by Joe Dallmann at Saturday, September 19, 2009