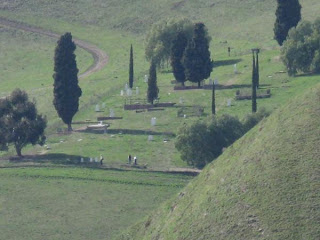 So for my first official post I thought I'd start with where I originally fell in love with cemeteries. Located in Antioch, CA you will find the Black Diamond Mines regional park. From the 1860s through the turn of the last century, five coal mining towns thrived in the Black Diamond area: Nortonville, Somersville, Stewartville, West Hartley and Judsonville. These are now ghost towns and very little besides the mines, which are now closed, remains here to remind us of what these flourishing towns once were. Luckily, although not well preserved during the 1970's, stands Rose Hill Cemetery. This is a small cemetery which was vandalized heavily during the 70's. 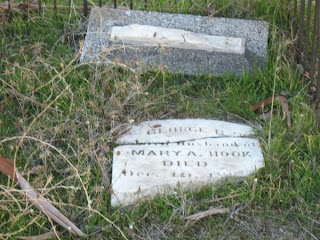 After doing a few searches on the net I've uncovered several accounts of people claiming that at night you can still hear the sounds of workers who labored day in and day out in the coal mines. Amongst the gravestones lies the grave of Sarah Norton (the midwife in the area and widow of Noah Norton the founder of the town of Nortonville). After talking to the docent at the park I learned the legend. It is said that Sarah Norton was on her way to Clayton in a horse drawn buggy to deliver a baby in October of 1879. 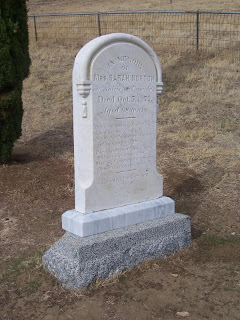 One of the horses was scared by a flash of lightning and she was thrown from the buggy and subsequently died. From the story I heard she was not as into the church as much as most of the people in the town. On two occasions the towns people attempted to give her a proper Christian burial. Both attempts failed due to sudden thunder and lightning storms. So on the third attempt it seems they just placed her in the ground and she never received a proper burial. People say she appears as a white figure floating through the cemetery after dark which has given her the name "White Witch". Others say she is just there to watch over the many children who have perished. Overall I'd say this cemetery is worth a visit for the beautiful area it's nestled in. Bring your own water though because it's a half mile hike up hill and there is no water available once you get there. You can also enjoy the miles of trails at Black Diamond as well...For more information and directions to the park you can visit the EBRP Website
Posted by Joe Dallmann at Tuesday, May 26, 2009