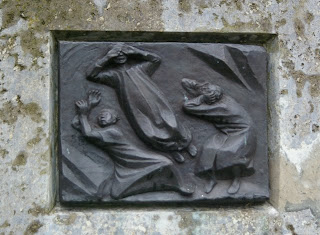 Still on the subject of weird comes this one from Hampstead cemetery........ 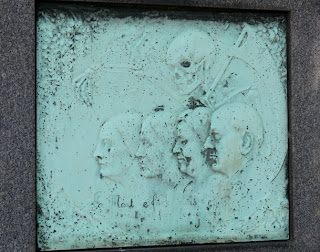 I've never seen the grim reaper over a family on grave before!
Posted by Jeane Trend-Hill at Thursday, April 29, 2010 4 comments: 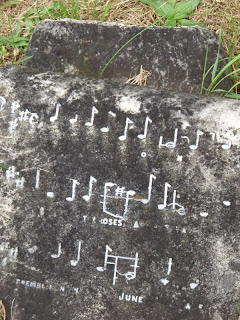 Brompton Cemetery, London. This is the only ‘musical’ headstone I have seen. I wonder if the notes were of a favourite piece. 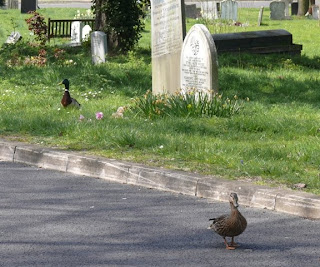 You never know who or what you are going to bump into walking around a cemetery. I recently encountered these tame ducks at West Norwood cemetery in London!
Posted by Jeane Trend-Hill at Tuesday, April 27, 2010 3 comments: 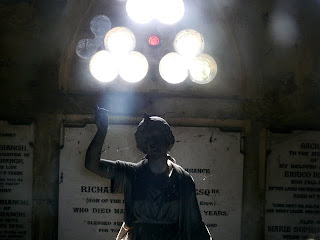 I peered into a vault and this angel startled me at first, you don't expect to see a full size angel inside a vault! I had to wedge my camera against the glass and take a few shots before people walked past and wondered what I was doing!
Posted by Jeane Trend-Hill at Saturday, April 24, 2010 1 comment: 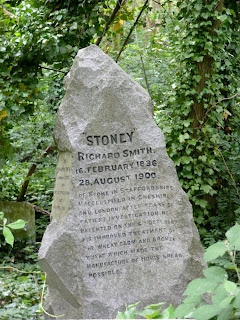 Stoney, Highgate East cemetery. I love this rock shaped monument for Richard Smith who was involved with the process of using wheat germ in the manufacture of Hovis bread.
Posted by Jeane Trend-Hill at Thursday, April 22, 2010 No comments: 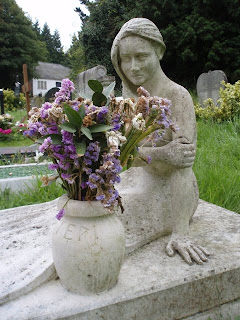 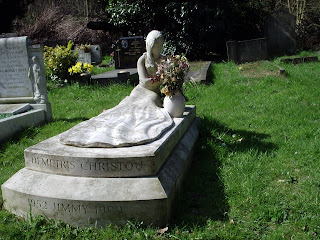 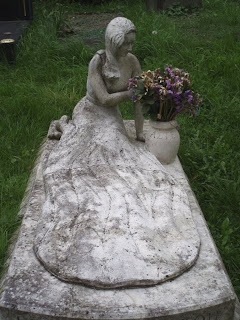 The bride from St Pancras and Islington cemetery London. A woman depicted in what is believed to be her wedding dress.
Posted by Jeane Trend-Hill at Tuesday, April 20, 2010 3 comments:

Being new to Facebook and Cemetery Explorers I feel I have been deeply honored and priviledged to be asked to contribute to this blog. Even moreso, I feel priviledged to have met Joe Dallmann who has been exceedingly supportive and encouraging. Thank you very much, Joe.

Joe mentioned that he has a brother in the military who is heading to Afghanistan and I think I speak for all here wishing he may complete his tour without incident and that he may return to his family in full health and vigor. This blog entry is to honor Joe's brother.

This is the grave of William Driver located in the old Nashville City Cemetery. Driver was an old salty dog - a wayfaring sailer of the high seas hailing from Salem, MA. It was on William's birthday in 1831 that his friends and family presented him with a gift to take with him on his next oceanic journey. They presented to him an American flag and William proudly hoisted the flag above his ship, The Charles Doggett, as he began his journey around the world.

It was on this journey that William stopped in Tahaiti where he met some of the descendents of the famed HMS Bounty who asked that he take them back to their native Picairn Islands. William Driver did so and took back to their native homeland the survivors of the legendary "Mutiny On The Bounty."

William Driver retired from sailing in 1837 after having sailed around the world on several occasions which was quite an accomplishment for his day. He settled in Nashville, TN where he had relatives. His hope was a quiet and peaceful retirement in the green gentle hills of Nashville surrounded by family and friends. William was living a gentle life and enjoying his retirement and every single day he would display that very flag which accompanied him on his journey around the world. Life was pleasant and serene. Then came the American Civil War.

When Tennessee seceeded from the Union William became fearful for he was a well known Federalist and everyone knew Driver's love for that American flag. William knew his flag was in danger so he took it and sewed it inside a comforter. Legend states that Confederate soldiers did indeed enter Driver's home on several occasions looking to confiscate and destroy his flag but it was never found. Still, William was subjected to taunts and hateful comments from those in Nashville supporting the Confederacy to the extent that he received threats of death.

When Nashville surrendered to Federal forces in 1862 William Driver took the flag which had been sewn inside the comforter and met a Regiment from Ohio as they marched into Nashville for occupation. The Regiment escorted William to the State Capitol building where his flag was then hoisted above.

Toward the end of his life, William Driver presented that old flag to his daughter with the admonition to protect it as a mother would her child. His daughter heeded the admonition and would later present the flag to the Smithsonian Institution where it was placed beside the flag which flew over Fort McHenry when Francis Scott Key wrote the Star Spangled Banner. William Driver's flag is considered one of the most historically significant flags in United States history and Driver's grave is one of only three places in the United States officially authorized by an act of Congress to fly the American flag twenty four hours per day.

You see, William Driver had given a name to his flag back in 1831 when it was presented to him and through all the years he called his flag by name - a name which caught on with the American populace. William Driver named his flag....... "Old Glory." And now you know the rest of the story.
Posted by Fallingwater123 at Tuesday, April 20, 2010 2 comments: 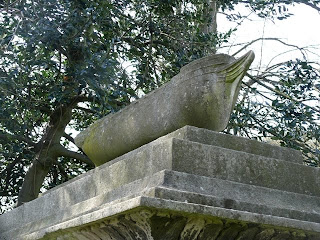 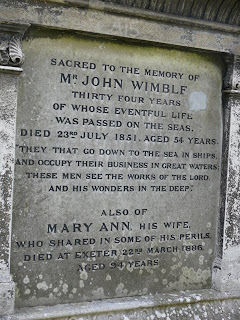 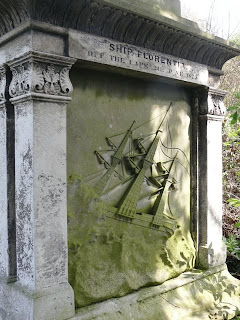 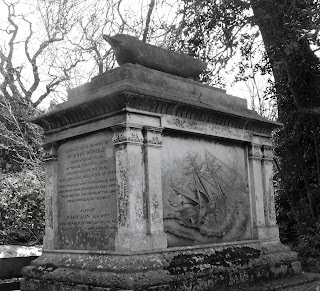 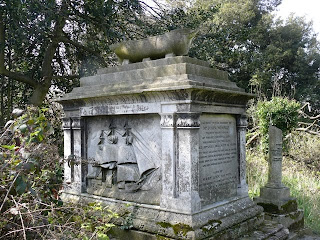 This amazing monument from West Norwood cemetery depicts the adventures of a sailor and his wife. The carving is absolutely wonderful and I love the inscription. 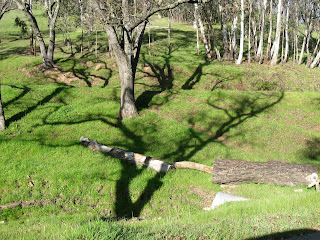 Ok first allow me to apologize for my lack of activity here lately as I've been getting killed by work in the real world and it's hard to be creative when I'm so darn tired.

I was going through some pics today and came upon this pic which I've worked with in Photoshp before. I was taking a picture of the shadows because I found them interesting. Does anybody notice anything weird about this picture? I didn't at first either. But notice how all the shadows of the trees start from the base of the tree and branch out. Keep in mind this is an untouched photo. Look at the shadow on the bottom of the picture. I see a shadow but no tree to support the shadow. The way the picture looks the tree that once stood there is off to the right. Then why does it's shadow still remain? I'm not sure if that was the tree that once stood there. That's just speculation. But there is definitely no tree to support this shadow...hmm
Posted by Joe Dallmann at Saturday, April 17, 2010 5 comments: 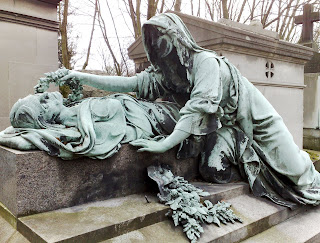 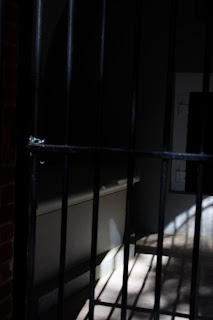 Born Martha Dandridge on 2 June 1731 to John Dandridge and Frances Jones in New Kent County, VA.
At 18 Martha married Daniel Parke Custis, who was two decades older then her. They had four children together, two of which died in childhood. Daniel died in 1757, which left Martha rich widow, giving her control over her dower inheritance and trustee control over the children's inheritance. Very unusual for that time.
At age 27, Martha married George Washington on 6 Jan 1759. John and Martha did not have any children together, but they did raise her two children from Daniel together. They also raised Martha's grandchildren from her son, after his death. Even though Martha and George had no children together, many children called Mount Vernon home. According to our tour guide, many descendants of these children still come back to visit the home.
In the will of General Washington, at Martha's death their slaves were to be freed. He did not want to see the slave families split up. Martha freed her slaves on 1 Jan 1801.
Posted by Terri O'Connell at Tuesday, April 13, 2010 4 comments: 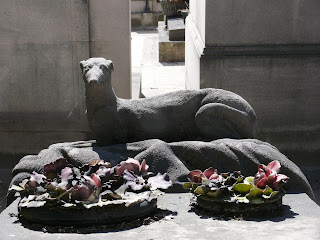 The French love their dogs and like to use them to decorate their family monuments, it's a place I see a lot of dogs in cemeteries. I've seen a few in the UK but not that many. 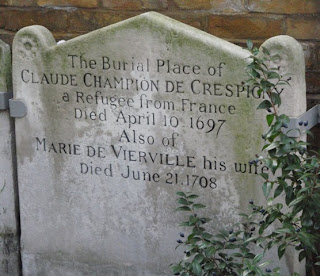 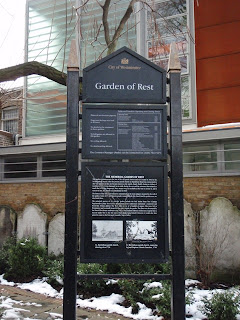 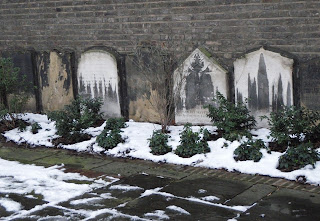 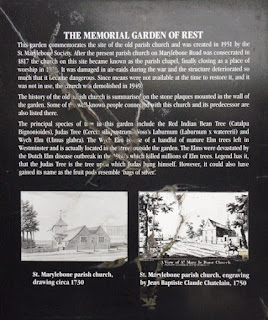 The garden of rest, a small churchyard in Marylebone London which has some very old graves including one for Claude Champion De Crespio dating to 1697. It is one of the oldest graves I have seen with the date still so clearly visible, probably because the area is so sheltered. 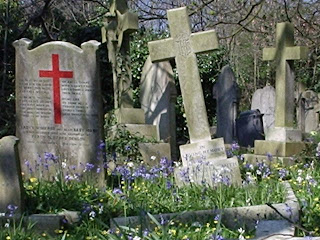 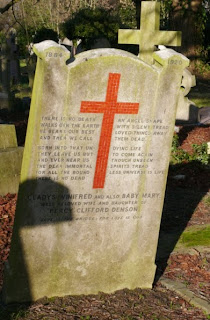 Red Cross from Elmers End Cemetery in London. This is the only red cross I have discovered in a cemetery. It stands out a mile!

Posted by Jeane Trend-Hill at Wednesday, April 07, 2010 No comments: 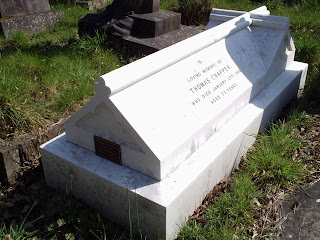 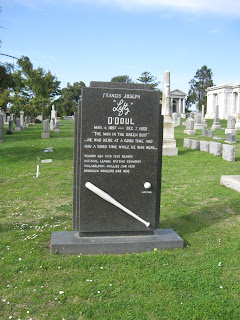 Lefty began his career in the minor leagues as a pitcher for the San Francisco Seals and from 1919-1923 played for both the Boston Red Sox and New York Giants. His arm began to give him problems so he was returned to the minor leagues where he converted himself to a power hitting outfielder. He was resigned to the New York Giants as a Platoon Player where he went on to bat .319. O'Doul was traded in 1929 to the Philadelphia Phillies where he won a batting title for hitting .398 with 254 hits, 32 home runs, 122 runs batted in, and 152 runs scored. In 1932 he won another title while playing for the Brooklyn Dodgers. Lefty ended his playing career where it started with the New York Giants in 1934. Then in 1937 Lefty signed to be the manager of the San Francisco Seals minor league team. He stayed there from 1937 to 1951 before going on to manage several other minor league teams. Although Lefty wouldn't take credit for it he was involved with the development of another famous baseball player by the name of Joe DiMaggio . Lefty simply said "I was just smart enough to leave him alone." Lefty was also instrumental in making baseball popular in Japan and even named the Tokyo Giants after his old team back home. He was the ambassador for baseball before and after WWII. 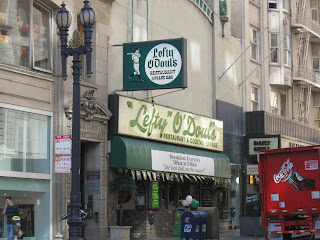 Although Lefty is gone the restaurant and bar he founded is not. It can still be found on Geary St. in San Francisco serving Lefty's original Bloody Mary recipe. It is said that the original bartender from 1960 is still employed there. I had been by the place a million times but never actually went in. I guess I'll have to save it for my next trip. Lefty now rests at Cypress Lawn Cemetery in Colma, CA. A great addition to my collection of baseball greats. And a great piece of San Francisco history.
Posted by Joe Dallmann at Saturday, April 03, 2010 3 comments: