Marie Holmes - Lady of the Night

In the lovely city of Santa Cruz, CA stands the Evergreen Historic Cemetery where many California pioneers and prominent citizens in Santa Cruz history are buried. Amidst those people lies a small grave I came across strictly by chance. I happened to notice a film tube sitting next to wall containing a list of several names who had found the tube. A geocache if you will. Geocaching is a hide and seek game played with tiny containers or trinkets and GPS systems where coordinates are given and it is your 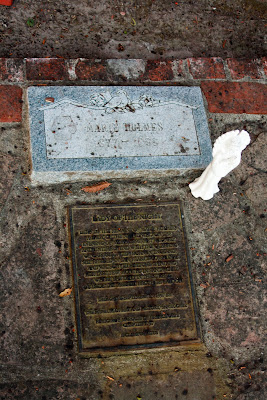 job to find whatever item is left in that location. I found this strictly by chance and was not there for geocaching. Next to the geocache I noticed a plaque on a grave. The grave of Marie Holmes. I will not go into detail about who she was or the circumstances surrounding her death because there is already and excellent writeup on her on the Santa Cruz County Website (click here) . After doing a little reading on the area it seems that houses of "Ill-Repute" were all over the area. Women would come from all over the area to find that the opportunities they thought were there were not really going to come to fruition so they'd be forced to turn to prostitution for what little money they could get. It turns out that prostitution was so rampant that several books were written on the area and it's ties to prostitution. On my next trip out I will try and document some of these older areas where the houses once stood. 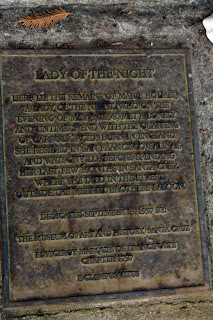 Lady of the Night
Here lie the remains of Marie Holmes a lady of the night who on the evening of May 5, 1898, met a lonely and untimely end with the quaffing of carbolic acid. Born in England she resided in San Francisco, Salinas and Watsonville before spending her last few months in Santa Cruz, where she died in the streets outside the Merrill Brothers Saloon.

Dedicated September 18, 1997
The Museum of Art and History Santa Cruz


So yes people this is my return to blogging and I apologize for the lack of updates for a while. Truth is I've been working on other projects such as my website and basically just getting through every day life. I'm not sure how often this site will be updated but please follow this blog because it will definitely be updated more often from now on just not as often as before. You can always find me on Facebook if you really want to. As for the other authors Jeane has written a few books since the last time she wrote. Darkowho was an occasional author has published a couple cemetery books. And Becky has been busy with every day life as well. Thank you all for your support...
Posted by Joe Dallmann at Sunday, February 13, 2011