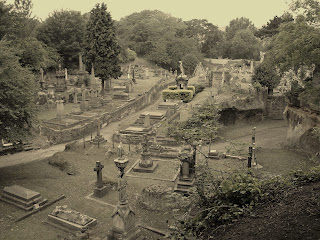 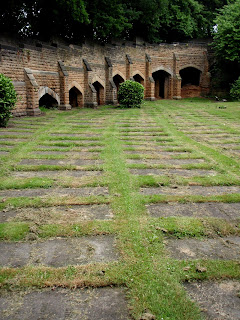 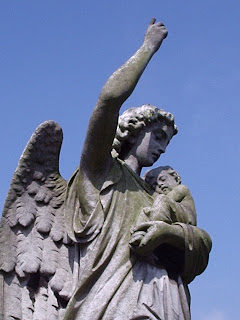 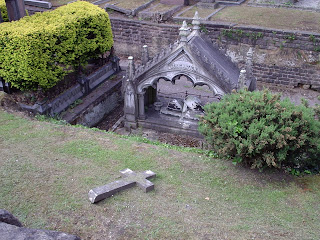 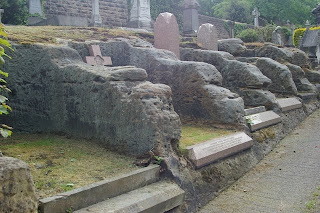 The city Rock Cemetery is unlike most cemeteries I have visited. It’s unusual in that it’s built out of sandstone rock and looks very much like an old style Necropolis with caves. Catacombs were built into a larger cave but they were never used.
The Cemetery was laid out by Edwin Patchitt for the Church Cemetery Company and was opened in 1856. It lies north of the centre of Nottingham. The Cemetery, built on old sandpits, slopes gradually northwards towards the Forest with a deep natural hollow, known as St Ann's Valley in the north-east corner of the site. The entrance to the Cemetery is off the corner of Forest Road East and Mansfield Road between large stone gate piers and ornamental iron gates. The main processional path, cobbled by the entrance, leads north-westwards with, standing west of the entrance, a small brick and render lodge (c1865) with a slate roof and gable and porch bargeboards. The main path leads westwards with midway along the path a spur leading to the site of the Mortuary Chapel (demolished 1965.) A cottage adjoining one of the three windmills which formally stood on the site of the Cemetery was used as a temporary Chapel after the opening of the Cemetery and was subsequently demolished.
A Mortuary Chapel, designed by E W Godwin, was built in 1878-79 and opened in August 1879. The Cruciform Chapel with a central tower and pyramidal spire stood 210 metres from the south-eastern lodge of a spur off the main processional path. The layout of the Cemetery is determined by the sandstone rocks and old sandpits on which the Cemetery was created. It has four main areas: the terrace to the south with a straight promenade to the site of the Chapel; the section in the centre and north-west which is terraced and has ashlar retaining walls; the catacomb range in St Ann's Valley in the east and the north-west corner which uses natural caves, cliffs and outcrops.
The main processional path along the top terrace runs east past a War Memorial (c1920, listed grade II) designed by Sir Richard Blomfield (1856-1942) built of Portland stone. Midway along the path a spur leads north to the site of the former Mortuary Chapel the main route continuing on the raised area of graves. The latter terrace has a number of fine Edwardian figure sculpture tombs. Another path runs northwards from the lodge to sandstone caves. This area has the most impressive Victorian monuments, several of which are set in rock. From the caves the path continues along a sunken path to a long ramp flanked by brick walls, part of the walls being contiguous with Forest Park. The ramp leads to St Ann's Valley, a natural hollow made larger and strengthened for the building of catacombs and the long ramped entrance (1851-56, the remaining walls and stairway listed grade II). This earthmoving together with the formation of the mounds and terraces elsewhere in the cemetery was done by the unemployed poor in the late 1850s.The exposed bedrock of the Valley supports buttressed Gothic arches. Immediately at the bottom of the ramp are lines of paupers' graves with stone slabs recording the names of the number of adults and children in each grave. South of the graves are the more scattered individual graves. A few ornamental trees are planted in the centre of the space. A tunnel links the Valley with the western part of the Cemetery.