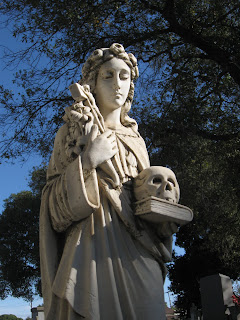 This was taken at Holy Cross Cemetery in Antioch, CA. It is one of 2 statues I've seen there depicting St. Catherine of Siena at Holy Cross. The other was in a previous post. From the age of 6, Catherine began having visions of angels as clearly as you and I see regular people. By the time she was 16 she became a Dominican Tertiary (A Dominican Tertiary is a lay member of the Dominican Order in the Roman Catholic Church. Such members seek a life of Christian perfection and penance while continuing the normal pursuits of the laity.) She continued to have visions of Christ, Mary and the Saints and was considered one of the most brilliant theological minds of her time. The letters of St. Catherine and a treatise called "The Dialogue" are widely considered some of the most brilliant writings of the Catholic Church. She lived from 1347 - 1380. She is known for receiving the stigmata which only became visible after her death. Her body was discovered in 1430 incorrupt. She appeared as she did the day she died. There are several religious accounts of this happening to other Saints in the Catholic church as well. (See incorruptibles)
Posted by Joe Dallmann at Tuesday, November 10, 2009