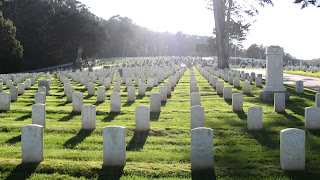 California was first colonized by Spain in 1542 with the discovery of the San Diego Bay. The region remained mostly unexplored for more than 200 years. Spain was known for establishing pueblos, missions and Presidios as a way of colonization. The Presidios served as military outposts which would be able to provide support in case of invasion for the pueblos and missions. They also served as trading centers as they would receive the annual supply of goods from Mexico and were also responsible for the disbursement of such goods. The first Presidios were Monterey and San Diego being established in 1769. It was in 1776 that the Presidio of San Francisco was established. It wasn't until 1850 with the discovery of gold that President Fillmore by executive order had established a military outpost at the Presidio. This was after a brief control by Mexico. By this time the Presidio had been nearly abandoned by Spain in favor of other interests. The first burial was at what was called The Post Cemetery in 1854. It wasn't until 1884 that the war 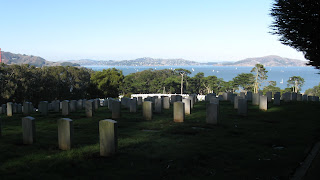 department designated 9 acres as the site for the San Francisco National Cemetery. Today the cemetery spans 28 acres and over 28000 burials. It is the only cemetery within the city limits of San Francisco because in 1912 city officials passed an ordinance evicting all other cemeteries from the city limits of San Francisco (see Colma). Burials are currently denied in this cemetery unless previously reserved or if for some reason a reservation is cancelled. From the top of the hill I could see sail boats in the distance and the Golden Gate bridge on the other side. As with all military cemeteries I have seen the stones here were pretty plain and uniform as I expected. There were a few scattered stones here and there that appeared different but I had a long day already when we went to see the King Tut artifacts at the museum earlier in the day. I would have pictures of that as well if they actually allowed photography inside...as always thanks for reading.
Posted by Joe Dallmann at Sunday, November 15, 2009