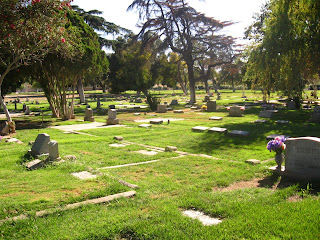 Directly across from the Holy Cross Cemetery in Antioch, CA is the Oak Hill Memorial Cemetery. While visiting the earliest marker I saw was 1876, however it’s possible the cemetery was established around the time Holy Cross was established which was in 1862. Oakview is currently home to approximately 20 acres of interments. The cemetery manager could provide no information on how old the cemetery was or exactly how many burials it contained. He could tell us that toilet bowl cleaner and a pumice stone was the best way to remove calcium deposits from a granite stone. My girlfriend decided that day she was going to clean her grandmother’s stone and I in turn decided that I would peruse the cemetery as she did so. There are many area pioneers buried here but the one that interested me the most was that of G.E. Seeno. Seeno is a popular name in my hometown so I decided to do a little research as to his accomplishments. With the help of a friend who runs the Pittsburg, CA Facebook page as well as some of the volunteers at the Pittsburg Historical Society. I was able to find the following information on G.E. Seeno. 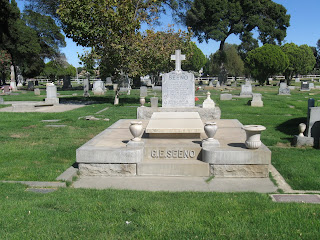 Nicknamed Tonno, Gaetano Erasmo Seeno (G.E. Seeno) was born in Isolla Delle Femmine Sicily in 1885. In 1899 at the age of 14 he came to Pittsburg and joined his father Erasmo who was by trade a stone mason and operated a blacksmith and plumbing business in what was then called New York of the Pacific. Then after coal was discovered in the hills the city was renamed Black Diamond. It wasn’t until 1906 with the opening of Columbia Geneva Steel that voters decided to name the city Pittsburg. It was around this time, and coinciding with the San Francisco earthquake that G.E. Seeno would team with his brother to assist in the reconstruction of San Francisco.

In January of 1911 he married Rosa Di Maggio which combined two of the most prominent families in the area. Her parents owned and operated a grocery store and later a macaroni factory. They had four children Helen, Edith, Alverra and a son Albert. Albert became Seeno’s associate in the contracting business. Together they started one of the most lucrative contracting firms in the area. Albert D. Seeno became one of the largest builders in the area along with his sons, created many of the local shopping centers and residential housing tracts on the south-end of Railroad Avenue.

In 1938 G.E. Seeno was elected to city council where he was responsible for negotiating contracts with public works which were instrumental in bringing affordable water rates to Pittsburg residents. He was also instrumental in securing money from federal funds that were granted during WWII for the construction of the Pittsburg Community Hospital.

Overall I believe G.E. Seeno was able to live the American dream. He came from Italy as a bright eyed kid with the belief that the things he wanted to accomplish would require hard work and perseverance. He began a legacy that has lasted through generations of Seeno family members and in his wake he left behind a number of landmarks for Pittsburg residents to enjoy. He is given construction credit for the Masonic Temple, The Buchanan Building which was one of the first major stores in Pittsburg, The Continente and Liberty Hotels, The Ford Garage Building, the Public Loan Building and the Lepori Building.

Sadly G.E. passed in 1951 leaving behind his wife and four children to mourn his death. He is buried at Oakview Memorial along with his wife Rosa Di Maggio Seeno, Daugther Alvera Seeno and her husband Morris D. Carey.