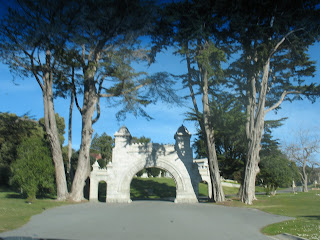 Cypress Lawn Memorial Park was established in 1892 by Hamden Holmes Noble in Colma California. Colma became a necropolis of sorts when in 1900 the city of San Francisco passed an ordinance prohibiting the construction of any more cemeteries due to increasing property values. Then in 1912 San Francisco passed yet another ordinance evicting all existing cemeteries from city limits. Only two cemeteries were allowed to remain. One at Mission Dolores and the National Cemetery at The Presidio. The remaining bodies in other cemeteries were then relocated to Colma which has since been given the name "City of the Silent". Colma is now home to 17 cemeteries which take up approximately 73% of the land. As of 2006 Colma had approximately 1500 above ground residents and 1.5 million underground. I guess there's a saying in Colma that goes "It's great to be alive in Colma". To date Cypress Lawn is the only cemetery I have visited in Colma. It boasts some of the most beautiful statues and bronze work that I've seen yet. I can't say enough how it always amazes me the amount of money that people spend on death. This monument is the burial site of lawyer LLoyd Tevis (March 20, 1824 – July 24, 1899) an American business man. Together with his brother in law and George Hearst he also shared stakes in copper and gold mines, headed the Wells Fargo Banking and Pony Express lines for more than 20 years. A third of a million acres was owned by the Kern County Land Company which he also owned with his brother-in-law. He was also the brother-in-law of John Breckinridge the 14th vice president of the United States. The "Tevis Cup" is named for him and is the prize for the annual Tevis Cup ride which is an equestrian endurance ride held annually and requires the riders to make the 100 mile Pony Express journey from Tahoe to Auburn in one day. (Click for info) 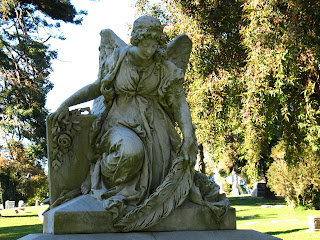 Another impressive piece I found here was the Larkin Angel. Buried here is Thomas Oliver Larkin (September 16, 1802 - October 27, 1858). He was one of the original signers of the California Constitution and the first and only consul to California. Discouraged by the opportunities in New England he quickly moved to North Carolina and South Carolina where he operated stores and sawmills. By 1831 he saw that he would never become wealthy in the Carolinas and decided to set sail for California which was still under Mexican control to be a clerk for his half brother John Cooper, a ship captain living in Monterey. He soon began operating his own flour mill and began trading with Mexico and Hawaii, dealing in flour, lumber, potatoes, horses, and furs. It was soon after that Larkin decided that California should become American. In 1844 he was appointed consul at Monterey and held that position for 4 years. In 1846 he began convincing Californians to think of independence and by July they had declared the Bear Flag Republic. After serving as part of the constitutional convention of 1849 he retired from the public eye to pursue business. He died in San Francisco In October of 1858, of typhoid fever, having lived to see California admitted to the Union.
Posted by Joe Dallmann at Sunday, June 14, 2009