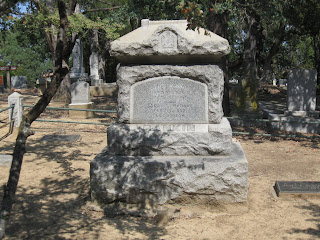 James Rankin is buried at Alhambra Pioneer Cemetery in Martinez California. He wasn't included in my original Alhambra post because I wanted to give him his own bio instead of a short blurb included in that post. James Rankin emigrated from Scotland at the age of 17 and landed in New York. In 1869 he headed to San Francisco and eventually ended up finding work in the Black Diamond Mines located between what is now Pittsburg and Clayton California. Between 1869 and 1884 he worked hard in the mines and rose to the rank of Mine Manager while owning a number of hotels and general stores in the lost towns of Nortonville, Somersville and Stewartsville. 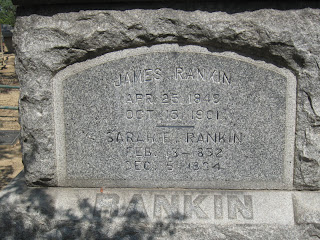 He was married in 1869 to Sarah who was the sister of his business partner Sam Brown. In 1884 James was elected to the position of Sheriff of Contra Costa County. This prompted him to move his family to Martinez where they renovated a new home to accommodate his growing family. Between the late 1880's and 1890's Rankin stayed very busy splitting his time between Martinez, the mines, and a 650 acre grain ranch he developed near what was then called New York Landing (Pittsburg, CA). In 1899 amid difficulties the Bank of Martinez asked Rankin to become it's president. He held that post until his death in 1901 at the young age of 53.

Martinez is one of the few cities in my area that have seemed to be able to balance the history of the town along with newer construction. In the downtown area many of the houses of the original pioneers can still be seen and are adorned with plaques indicating who lived there originally. I drove around Martinez looking for the Rankin house to no avail. It still exists I just couldn't find it. Part of his land was turned into what is now Rankin Park. It's a beautiful park with lots of trees and a few hiking trails located not far from the cemetery. James Rankin is no doubt an interesting man who had many accomplishments in his lifetime. One of the people that came here in search of the American dream and actually seems to have found it. I'll leave this post with a bit of speculation. I believe his death was most likely due to his work in the Black Diamond Mines. Many of the people in that area died at an early age. Some due to disease and others just from breathing coal dust for a number of years. I can't imagine that to be healthy.
Posted by Joe Dallmann at Sunday, August 30, 2009