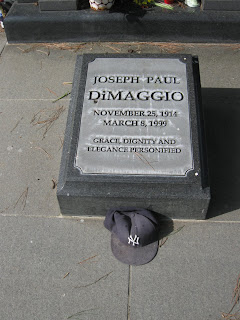 Most of the time when I profile a specific person it's necessary to spend a ton of time researching what they did to make them sound important. Well still some may not know Joe DiMaggio or even care who he his because they think baseball is stupid. But come on people it's Joe freakin DiMaggio. One of the greatest players to ever play the game. I've known where he was buried for the longest time but was never in the area to swing by and take the pictures. So a couple weeks ago I just decided to take the two hour drive out to Colma, CA and get the pics.

Joe had a huge resume of baseball accomplishments. He was a 3 time MVP and 13 time All-Star. He is best known for his 56 game hitting streak and at one time was voted Sport's Greatest Living Player. Joe was born Giuseppe Paolo DiMaggio, Jr in Martinez, CA. The 8th of 9 children born to Italian immigrants Giuseppe (1872–1949) and Rosalia (Mercurio) DiMaggio. Joe's father Giuseppe was a fisherman by trade and managed to work his way from Ellis Island to where he eventually settled. A town some of my friends may know Pittsburg, CA. Giuseppe worked hard and after 4 years he sent for his wife and oldest daughter. Giuseppe hoped that his 4 sons would become fisherman like himself and generations of DiMaggios before them. Joe would have nothing to do with it as the smell of rotten fish nauseated him. Joe would rather be p 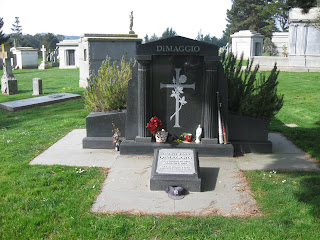 be playing baseball. And really who could blame him? Joe's father couldn't see any reason why playing a game could lead to a successful life. These were old times and if you weren't working hard you weren't going to survive.

Joe was playing semi pro baseball when his brother Vince was playing for the San Francisco Seals. The seals were down a shortstop and Vince talked the manager into allowing Joe to fill in. Joe made his professional debut October 1, 1932 however his major league debut came May 3, 1936 with the Yankees. He led them to 9 titles over his 13 year career. He was also the first player to be signed to a contract worth more than $100,00. Quite a contrast to today's contracts which offer several million for basically doing nothing. The league minimum was $400,000 in 2009. A ridiculous amount for sitting on the bench.

I could go on all day listing his accomplishments but like I said before. Do I really need to say any of this? Doesn't everyone know who Joe was? The DiMaggio descendants and relatives are still scattered throughout my hometown of Pittsburg, CA and I can't help but think of Joltin' Joe every time I see the DiMaggio name. Sadly Joe succumbed to lung cancer at the age of 85 March 8, 1999.
Posted by Joe Dallmann at Saturday, February 27, 2010