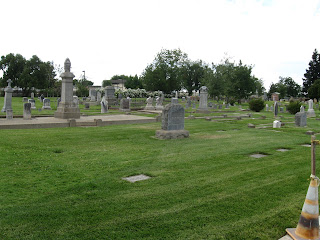 Franklin California? We have one? Really? I had never heard of Franklin, CA until yesterday. I was going to take a trip to Sacramento's Historic Cemetery, which I did. So I decided to do a little research before I left and this cemetery caught my eye. I love those little hole in the wall places which is why I decided I would pay it a visit on my way home. Franklin, CA is located just south of the city of Elk Grove on a country road...well as country as we get in California anyway. Upon arrival I thought to myself, no biggie, it looks like this is going to be uneventful. Boy was I wrong. 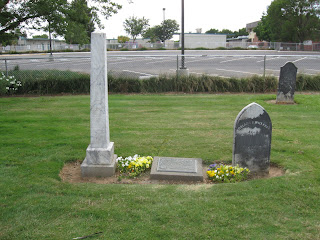 After walking around taking random pictures and looking for something out of the ordinary. I came across the grave of Alexander Hamilton Willard. Willard is said to be the last surviving member of the Lewis and Clark Expedition. Around 1800 he was recruited to the Corps of Discovery by Captain Amos Stoddart's artillery company. He served as a blacksmith, hunter and gunsmith. On July 12, 1804 Willard received the worst punishment ever given to anyone of the Corps of Discovery the Courts Martial on the Trail. Together with John Colter and George Shannon, Willard was assigned to look for Baker Bay, some whites at a trading post or with a ship. 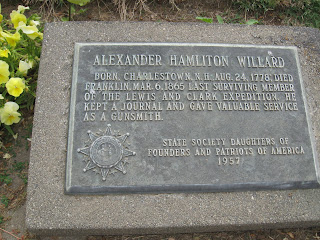 After finding nothing, Willard and Shannon decided to allow Colter to return with news to the main camp. As they slept, a group of Native Americans stole their rifles. As the main party returned the Native Americans were frightened and immediately returned the rifles. For this offense Willard was charged with "lying down and sleeping on his post whilst a sentinel". A capital crime under the "rules and articles of war" punishable by death. Willard agreed that he had laid down while on post but disagreed that he was sleeping. The judge saw otherwise, and luckily for Willard he was not sentenced to death but to 100 lashes divided up into 4 consecutive nights. This was a way of increasing his punishment. Six months after returning home from the expedition, Willard married Eleanor McDonald and went on to father 12 children with her. And through Clark, Willard was able to find work as a blacksmith serving several Native American tribes. He also served Clark in the War of 1812 acting as a courier. In 1852 Willard made the trip from Missouri to California. This trip was difficult for people half his age. A testament to a tough pioneer. Willard settled in Franklin a stagecoach stop en route to Stockton, CA where he was believed to still be a blacksmith. Willard lived to the ripe old age of 87 and finally breathed his last breath March 6, 1865.
Posted by Joe Dallmann at Sunday, July 12, 2009