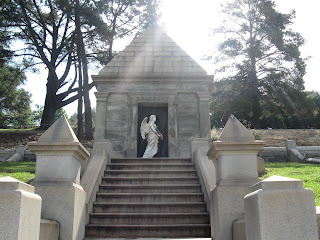 The other day I did a post on pyramids and realized that I was missing some information as well as a decent picture of one of them. So it bothered me until today when I could get to Oakland for more information. Basically all I needed was a name. It turned out there were 2 names that I needed. Lewis Leonard Bradbury November 1823 - July 1892 and Simona Martinez Bradbury September 1845 - December 1902. Since UC Davis has an entire web exhibit (Click Here) dedicated to the Bradbury family I won't be doing a full bio on this family. Instead I'd like to talk a little about the Bradbury Building in Los Angeles which is named for Lewis Bradbury. (Photo Credit About.com)

Bradbury had a grand vision for this building and actually fired the first architect (Sumner Hunt) that he hired because he didn't see Bradbury's vision. He then proceeded to hire a man by the name of George Wyman who at first declined to do the work. It wasn't until Wyman had a talk with his dead brother Mark through the use of an Ouija board that he finally agreed. The original estimate for the building at the time was $175,000 and by the time it was finished Bradbury spent more than $500,000.

Bradbury spared no expense during construction and in 1977 the city of Los Angeles deemed the Bradbury Building a historic landmark. Many movies and tv shows have been filmed in the Bradbury Building as well. It was prominently featured in the movie Blade Runner. Today the building is home to the Los Angeles Police Departments Internal Affairs among others. Tourists can visit but are limited to the first landing and not beyond. Sadly Lewis Bradbury died in 1892 before seeing the official opening of this building which was completed in 1893. (Credit photo of interior to Wiki)
Posted by Joe Dallmann at Thursday, July 02, 2009