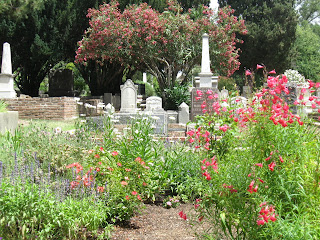 Sacramento Historic Cemetery also known as The Old City Cemetery was established in 1849 with it's first 10 acres being donated by Captain John Sutter. Among the first burials were some 600 victims of the 1850 cholera epidemic. This epidemic was sparked by a passenger on a ship called the "New World", a ship docked at the wharf, when he emerged and suddenly collapsed. In less than 3 weeks cholera took the lives of close to 1000 people and eventually over 3000 people. Many of them were buried in mass graves at what was once called Helvetia Cemetery, however due to heavy flooding many of the burials were reinterred at Old City Cemetery and are now believed to be under the military graves.

In all 40 doctors worked on cholera victims during this crisis and 17 gave their lives as a result. In 1957 a plaque was erected in their honor by the Sacramento El Dorado Medical Society Historical Committee. Today the cemetery spans some 44 acres and houses some 25000 burials. It is known for it's historic rose garden and for being home to several California pioneers. Found within you can also the Odd Fellows Cemetery and the Masonic Lawn Cemetery. The grounds are well kept and tours can be arranged or you can take the self tour. After having been there I'd say planning your trip and sections you'd like to visit is advisable. There is no way you can cover this cemetery with just one day so I'll have to take another trip out to gather more information. 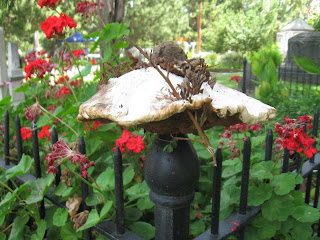 I would like to close this post with the anomalous mushroom I found growing on the spikes of an iron gate. At first I thought somebody had placed it there on purpose. But after taking a closer look I noticed it had been there for quite some time and the surrounding plants had begin to grow through it. Definitely an interesting find.
Posted by Joe Dallmann at Sunday, July 19, 2009