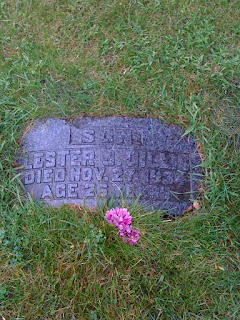 Lester J. Gillis, aka "George Nelson" or "Baby Face Nelson" was born Dec 6 1908 in Chicago to Joseph and Mary (Douget) Gillis.
Baby Face's criminal career started early in his teen years. He was arrested for theft and joyriding at 13 and was sent to the penal school several times.
It has been said that he worked with the Capone organization.  This has been dismissed by his biographers Steven Nickel and William J. Helmer, due to lack of evidence.
His career came to a short end in 1931 when he was arrested and sentenced to 1 year in state prison.  During transport, he overpowered his guard and escaped.
On 18 August 1933, he robbed his first bank in Grand Haven, MI with Eddie Bentz. This robbery is said to have been a near disaster though most made a clean getaway.
Nelson was part of the newly formed gang that financed and helped Dillenger escape from jail in Crown Point, IN.
Nelson was said to be a devoted husband and father, bringing his family with him while on the run.  According to the 1930 Federal Census, Helen and Lester had 1 son.
On 27 November 1937, the Battle of Barrington started when Nelson, his wife Gillis and John Paul Chase where driving in a car and spotted by the FBI. After a few U turns by both vehicles, Nelson wound up being the chased. During this battle, he killed two agents.
Telling his wife to flea into an open field, she turned briefly to see her husband had been shot and would later prove to be fatal. After the fight was over, the three fled the scene in the agents Hudson. While fleaing the scene, Nelson told his wife "I'm done for," as he continued to give directions to Chase to get them to the safe house. He died later that evening in his wife's arms.
An anonymous tip provided the whereabouts of Nelson's body on 28 November, 1937. He was wrapped in a blanket and thrown in a ditch in front of St. Peter's Catholic Cemetery in Skokie, Illinois.
Nelson and his wife are both buried in St Joseph's Cemetery, River Grove, Illinois.
Nelson was responsible for the deaths of:
W. Carter Baum - during the Little Bohemia Shoot out
Herman Hollis - Barrington, IL
Samuel Cowley - Barrington, IL