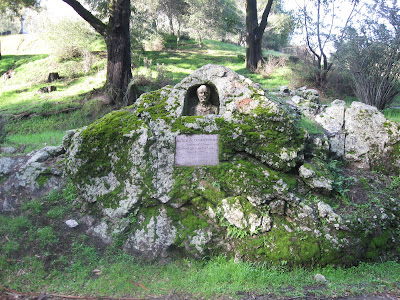 A native of Virginia Alfred D. Taliaferro M.D. has the distinction of being the first M.D. in the Marin County area. He was widely respected and liked by many. After all who wouldn't want a doctor to like them? He was one of the first Europeans to settle in what is known today as Fairfax, CA. Fairfax was originally a land grant of around 6600 acres given by the Mexican government to Domingo Sais on August 10, 1839 in return for his military service to the Mexican government. Domingo then gave Taliaferro a large park like area of the land. Probably to try and sweeten up the doctor in case he needed his services. Upon visiting Taliaferro with his wife Charles Fairfax (also from Virginia) fell in love with the land and Taliaferro had the land transferred to him and his wife Ada who made it their home. 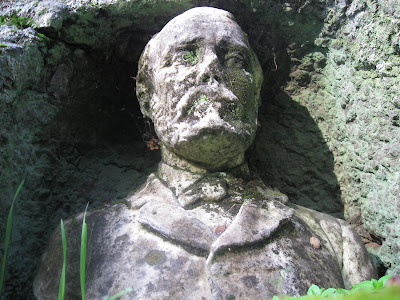 Taliaferro also served in the California State Assembly and later went on to become a State Senator.

I happened to notice this bust on the way out of the cemetery and stopped to take a closer look. I found it a little creepy as I do most busts. This one had green moss growing on it's eye which gave it an even creepier look. I often wonder how much likeness an artist captures when they do these carvings. Then I think of Mt. Rushmore or something and realize that I'm most likely looking at what they actual person looked like before death. I think that's what creeps me out the most....
Posted by Joe Dallmann at Saturday, January 30, 2010