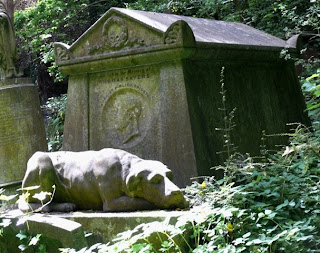 Thomas Sayers was a pugilist (bare knuckle boxer.) During his career he was only defeated once. His fighting career lasted from 1849-1860, when a match billed as the "World Championship" ended in disarray. An unprecedented public collection funded his retirement, but he died five years later at the age of 39 of diabetes and tuberculosis. Such was his fame that his burial at Highgate cemetery was attended by ten thousand people. His friends again subscribed for the erection of a large tomb, bearing a statue of his beloved dog Lion who attended Thomas' funeral wearing a black ruff around his neck.
Posted by Jeane Trend-Hill at Sunday, January 10, 2010