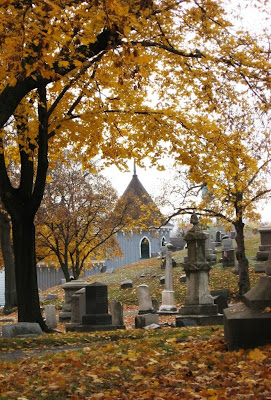 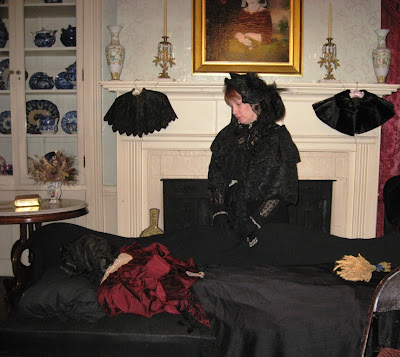 Memento Mori means Remember you will die, Remember you are mortal.
Funerals at the turn of the century were still held at home, in the front parlor, and were by invitation only. If you were invited you attended, it was simply rude and ill mannered to refuse a funeral invitation. Embalming was not practiced before the Civil War so funerals were quick affairs. Once President Abraham Lincoln was embalmed and lying in state did people then accept the practice. When funerals became a business early in the 20th century they were appropriately called Funeral Parlors. Urban growth and crowding made way for the growth of the funeral industry.
Queen Victoria started the rituals of mourning when her beloved husband of 21 years Prince Albert died. She mourned him for over 40 years until her death. The year Albert died was 1861 and as was custom, black drapes hung over all of the mirrors in the home of the deceased. The Victorians were extremely superstitious, especially where death was concerned. They believed that if you looked into a mirror while a body lay dead in the same home you could be the next one to die.
The queen started wearing a widow cap with a veil covering her face. The tradition was adopted because the Victorians believed that a grieving widow should not allow the outside world to see her emotions of grief. These feelings were to be kept private, out of honor and respect for the deceased love one. 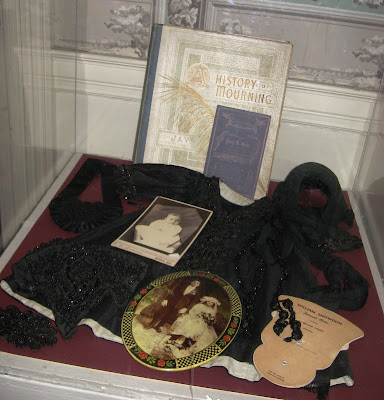 There were two strict years of mourning for Victorian women. For first year mourning it was mandatory that she wear all black. Most wore black crape, a silk material that is crimped in appearance, much like crepe paper, as we know it today. Bombazine, a wool blend, or broadcloth was also permissible. No jewelry or trim on clothing was allowed and a widow cap with veil was required. Handkerchiefs were white broadcloth trimmed with a black border and often a black monogram in the center.  If she could afford them she would purchase her mourning clothing and undergarments. If she could not afford them she would dye her items black. Once her two years of mourning was up then she would have to bleach everything white again.
The pungent dye odor permeating the towns during the Civil War gave a distinct Smell of Death as so many women were in mourning. The horrific odor was the reason all of the clothes dying was done outside the home at that time. The dying process itself was tedious. An original account from 1887 describes the process. Garments to be dyed, black in this case, must first be clean, to prevent spotting. Steep items in soap lye overnight and rinsed out well. For silks, work items in bichromate of potash, just below boiling heat. Next dip garments in Logwood, wash in suds, then rinse and hang to line dry. For woolen goods, take six ounces of blue Vitriol, boil for a few minutes then dip the items for ¾ of an hour, airing them often. Next make a dye with 3 pounds of Longwood, and boil garments in this for a half hour. Start dipping items again for ¾ of an hour, air goods, then dip ¾ of an hour more. Finally wash all dyed garments in strong suds, rinse and line dry. This dye will not fade in the garments from sun exposure.
The black crape mourning pieces have an interesting story. Someone started a superstitious rumor, perhaps the crape manufacturers, that it was bad luck to have any crape in your home ay the end of the first year mourning. Everything crape was to be thrown away, lest someone else should die. How convenient for the crape industry, each time there was a death an entire years worth of crape had to be purchased again!
Second year mourning was not as strict. The veil no longer had to be worn over the face, and colors worn could be black with touches of mauve, gray or white. Jewelry was allowed, particularly a black coal like stone named Jet, a favorite of Queen Victoria. Photo brooches of the deceased and hair work jewelry were also very popular. In fact these pieces are quite an art form and very collectible today.

Gentlemen in mourning simply tied a black crape armband around their left arm to show that they were in mourning. Even in wealthy households the servants wore mourning. Babies and children alike wore mourning the duration depended on the relationship to the deceased.
Mourning jewelry was introduced in the popular magazine Godey’s Lady’s Book in 1850. Hair work jewelry was one type. In this craft women used the hair of a loved one to fashion brooches, bracelets, earrings and watch chains. Hair work jewelry symbolized the need for wanting the deceased one close by. An even greater dimension of this craft began when women assembled intricate designs of hair in large shadow boxes and oval glass frames. The designs were mounted on silk in unique frames, made for the memorial pieces. Inscriptions to the loved one were also included in the framed piece. These are highly collectible and fetch a good price.In America, mourning jewelry was popular during the Civil War due to the death of so many soldiers. Often the soldier would leave a lock of hair in the event that he did not return. Materials such as gutta-percha, jet, black glass (French Jet), black enamel, hair work, pinchbeck, (a metal that looks and wears like gold but isn’t) and gold were commonly used in the creation of mourning jewelry.
The Relique by poet John Donne (1571-1631) an early reference to a hair bracelet:
"When my grave is broke up againe
Some second ghest to entertaine,
(For graves have learn'd that woman-head
To be to more than one a Bed)
And he that digs it, spies
A bracelet of bright haire about the bone,
Will he not let us alone,
And thinke that there a loving couple lies"

Some examples of mourning jewelry are Jet, a coal type black stone. Jet was a favorite of Queen Victoria for mourning jewelry and German Jet was especially coveted for its quality.French jet (shiny black glass) was of lesser quality than jet.Stewart Crystals, from the Elizabethan age, was the first mourning jewelry. These pieces are extremely valuable and quite lovely, found in brooches, pendants and rings.Vulcanite is a rubber like compound that was pressed and made into black mourning brooches.Red Bohemian Garnet mourning jewelry is exquisite in how the deep red stones sparkle. These pieces are especially beautiful and elegant looking in brooches and drop earrings.Gutta Percha comes from a tropical tree in South East Asia. The sap, a latex type of product, was used for mourning jewelry, especially in brooches.Georgia Sepia Miniatures on Ivory are exquisite examples of mourning jewelry from the Georgian to mid-Victorian period. Many popular designs included weeping willow trees, a dove, urn, hearts, a wreath, ivy, angels and Georgian ladies.Photo brooches of the deceased loved one were also popular. In 1839 there was the daguerreotype photo, in 1850’s to1880’s the ambro type and finally the tintype in 1850 to 1940. One unusual type of brooch was an eye miniature brooch. These were popular during the late 18th and early 19th centuries. These are highly collectible pieces with an eye painted in the brooch.Other items include mourning pins, used to hold ribbons and braided hair of the loved one. These were commonly worn on the children of the deceased. 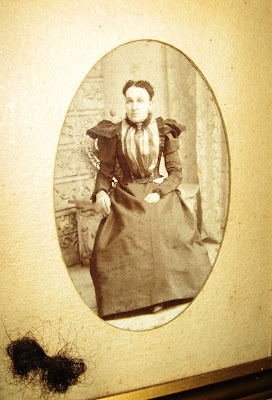 In an 1849 mourning scrapbook we read this endearing poem:
This lock of hairI once did wearBut now I trust it to your care.Look oft at thisAnd think of meWhen I am far away from thee.

Here is a not-so-subtle poem from 1851:
When I am deadAnd in my graveAnd all my bones are rotten,Look at thisAnd think of me,Lest I should be forgotten.
Another highly collectible Victorian mourning tradition was the post mortem photo. These are regarded by most people today to be morbid, yet they were quite common cherished sentimental pieces to the Victorians. This was especially true if an infant or child died. Often the post mortem photo was all that the family had to remember the child, so it was a precious keepsake. These photos helped keep the memory of the lost loved one alive. It was a symbol of comfort to the Victorians. Believe it or not, in the coal mining regions of northeastern PA in the late 1800’s the coffin had to be checked before burial! It was necessary to make sure that the deceased was inside. Revelers would often remove the body in order to sleep off their inebriation in the comfort of the casket instead of on the floor! This is probably one of the strangest of the Victorian mourning traditions.
Posted by Joe Dallmann at Sunday, January 10, 2010