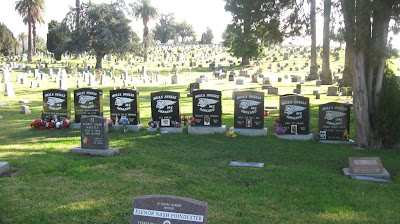 "When we do right, nobody remembers. When we do wrong, nobody forgets." That is said to be the primary motto of the group known as "The Hell's Angels Motorcycle Club" (HAMC). As I was strolling through Evergreen Cemetery in Oakland California last week I was walking far away on the hill toward the back. I noticed what appeared to be a series of black grave markers that looked rather new. I decided I'd make my way back around that way on my way back to my car. Once I got closer and saw what I had been looking at I got as excited as a kid in a candy store as I usually do when I come across something special. There in the cemetery stood the graves of 9 members of the Oakland chapter of the Hell's Angels Motorcycle Club. The Hell's Angels are known as a notorious biker gang and crime syndicate by some and by it's members as just a group of guys that have banded together for the love of motorcycles who are involved in fundraisers, group rides, parties and motorcycle rallies. 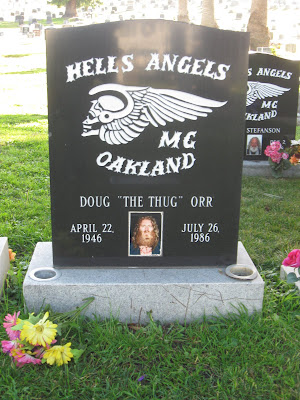 Perhaps the most intriguing thing for me was their nicknames. Here you see Doug "The Thug" Orr. To me this was an awesome nickname. I mean if you're going to have a tough name I think "The Thug" pretty much sums it up. And after looking at his picture I figured Doug was not the one I'd want to meet in a dark alley. I had to remind myself that Doug probably had a family who he was probably really nice to. He was probably nice to his friends as well. But I wouldn't want to get on his bad side that's for sure... 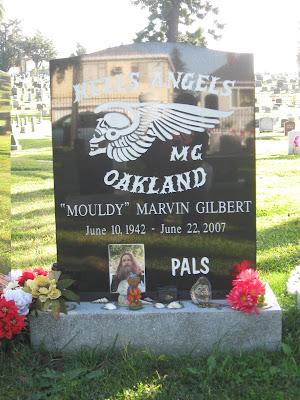 Another one of my favorites was one Mr. "Mouldy" Marvin Gilbert. Not that I would like to have the name Mouldy myself. I again found myself staring at his picture and wondering what life must have been like for Mr. Mouldy. I would like to believe that the Hell's Angels just got a bum rap for a few members being involved in illegal activities and the rest of the guys were guilty by association. Sort of the way a Pitbull biting somebody makes the news whereas a German Shepard does not. 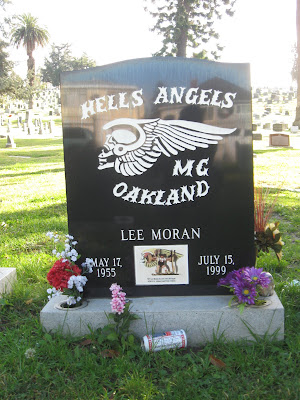 Another interesting figure I found was Lee Moran. He didn't have a nickname listed but at the bottom of his marker was a small plaque that read "81" Lee Moran Record 1003lbs Squat July 8t, 1984. Yes people I said 1003lbs. This man lifted just over half a ton. Here is an excerpt I found regarding Lee's Record attempt.
Courtesy http://www.strengthtech.com
Lee wanted the 1003 on his third, a weight he's been priming for all year. One of the most spectacular event to ever occur in our sport began to unfold as Lee stood with this awesome load. The bar whipped terribly, and as Lee tried to steady himself for the signal, one collar popped off the bar, almost as if it were shot from a gun. Hundred pound plates flew off of that end, stressing the other collar, which popped loose as well, releasing plates in that direction and causing spotters and officials to run for cover. The bar, now overloaded to one side rocketed up off Moran's back and flew through the air, a deadly missile which splintered the stage as it landed. Miraculously no one seemed to be injured and Lee was more unaffected than anyone else there. I grabbed him and asked, "Are you okay?" "Ken, what the hell happened?" He was totally non-plussed, and mainly concerned that whatever had happened wasn't his fault and would he get another attempt at it. With another 3rd attempt granted as a matter of course, he asked "Can I do it?" "You can do it." "You're right coach, I can do it." Announcer Tony Carpino whipped the audience to a roar as the bar was again secured. Moran stood with the half a ton, and sunk it. I mean he hit the bottom with at least and inch to spare and shot it to the top. History was made as three white lights greeted the effort, setting off pandemonious celebration.

In all there are 9 total stones. On the back of a couple of them are the names of a few women but I wasn't sure if they were actually buried on the other side of the men or not. I attempted to get someone from the chapter to give me a story to no avail. Oh well maybe next time or maybe someone will read this one day and contact me with more information.
Posted by Joe Dallmann at Monday, January 04, 2010