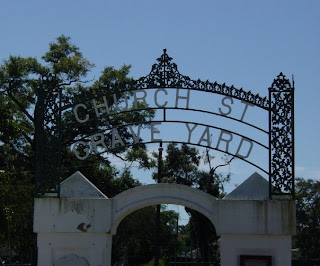 Article by Cody A. Quinn Photos by Amy Walker

I would like to feature an article written by a student that I acquired from his mother. Both share a passion for cemeteries. This article is left as I received it from Cody's Mother. Thanks for the information Cody

Church Street Graveyard is Mobile’s oldest cemetery and opened in 1820 and closed in 1898.(Sledge, Church Street) The land was bought by William E. And Joshua Kennedy on April 4, 1820 for $20; however the yellow fever epidemic of 1819 filled the graveyard before the arrangements for buying the graveyard could be made.(Nelson, p.4) The yellow fever epidemic of 1819 killed 274 people, over 10 percent of Mobile’s population, and soon filled Church Street Graveyard. (Nelson, p.4)

Originally the graveyard was located half a mile away from town, as it was believed that germs come from the cemetery to kill the residents of the city.(Delaney, p.4) The city would expand to cover the area around the graveyard, which is why the Church Street Graveyard Wall was built, to prevent anything from going in and to keep disease from spreading (it did not work however).(Delaney, p.3) Later more epidemics would devastate the population and fill the graveyard with corpses, especially the yellow fever epidemic of 1897, which killed a huge part of the population.(Delaney, p.3) 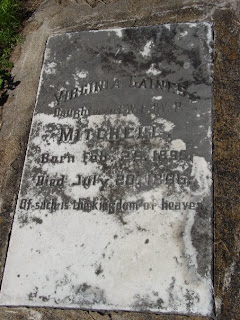 When earlier Graveyards were taken over by development of Mobile’s streets, the graves were relocated to Church Street filling it immensely; By the 1860's and 70's nearly all of the space was filled.(Schroeter, p.3) The graveyard is a square plot of land with the four sides measuring 417 ½ feet, with one part of the graveyard for strangers, veterans, and poor citizens, also known as “Potter’s Field” which was relocated to Magnolia Cemetery after its opening in 1836.(Nelson, p.3) The other two-thirds of Church Street were reserved for Catholics, Protestants and Jews.(Nelson, p.3-4) Church Street Graveyard contains 20 rows and 14.5 lots of graves, with over 1,000 burials performed there, the graveyard officially closed in 1898 due to overcrowding, but a few important burials have taken place since then.(Nelson, p.4)

Since 1898, only a few burials have taken place there, the most notable being of Joe Cain, relocated to Church Street in 1968 by Julian Lee Rayford, also buried next to him, with Eugene Walter, a notable poet, buried next to them as well.(Sledge, Church Street) On Joe Cain Day, the graveyard hosts a large festival as members of the Merry Widows Mardi Gras society gather at Joe Cain’s grave and mourn over it, decorating it with liqour bottles, beads, etc.(Sledge, Church Street) One of the most famous sites in Mobile is the Boyington Oak, just outside of the Church Street Graveyard wall.(Schroeter, p.5) The oak is named after Charles Boyington, convicted of murder and hanged as punishment. He predicted an oak tree would grow over his grave to prove his innocence, and not long after the burial an oak tree began to grow.(Schroeter, p.5)

The design of the graves in Church Street Graveyard originates from early Spanish artisans who carved the headstones in an extravagant fashion; this form of grave making is still used today.(Sledge, Church Street) Special examples of these types of headstones are that of Isaiah Thomas Andrews (died May 30, 1819), a Boston seaman; a sandstone marker of John McCartney (died September 17, 1835), featuring a winged soul statue.(Sledge, ChurchStreet) Tombstones tell stories in this cemetery, a brother and sister are buried side-by-side with their headstones engraved with sculptured clocks with hands set to the hour of death. Another example is sad little markers of infants who have never lived long enough to know what life is. Church Street Graveyard is the final resting place of those who created Mobile from nothing.(Sledge, Cities, p.21)