Tombstone Tuesday and the Presidential Seal 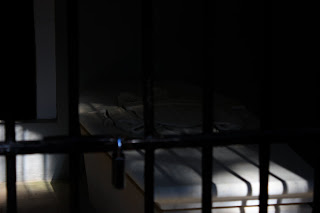 The quality of this photo is not my best, but I had to share it anyway. On my trip to the east cost in October, we had the chance to visit Mount Vernon, it was so beautiful. We did not have a lot of spare time to see the sites and what we did see was very rushed.
While visiting Mount Vernon, we paid for the National Treasure: Book of Secrets tour. I love these movies and was intrigued to see this historical sight from the movies perspective.
Our tour was no more then 20 people, large enough for group participation in questions asked and small enough to be able to get individual attention by our tour guide. 99% of the tour was the outside grounds of Mount Vernon, the only thing inside that we saw was the basement. We entered the basement through the outside doors and went down a few steep steps, our purpose there was to view the cornerstone. The original cornerstone had been removed an
d placed upstairs in the house. But we got to view the one they replaced it with, our purpose there was to see how the movies changed things around.
Our tour guide took us to all the important places on the grounds that was used in the National Treasure movie and explained how they changed things to make the movie more "Hollywood". The tour was wonderful and I wished we had more time to wander the grounds and see inside of the house.
When the tour was over we took a few spare minutes to visit the tomb where the Washington family is buried. In his will, President (General) W
ashington had decided where a new tomb would be built to replace the family vault that was deteriorating. In 1831 the tomb was completed and  the Washington family, including Martha and the General and other family members.
According to the woman that I spoke with there is about 30+ people buried in this tomb. She could not tell me exactly who they all were.
When the remains were moved to the new tomb, The General and Mrs. Washington were moved to a sarcophagus, which was to large to fit into the tomb that had been built. Originally, all of the family were to be onside the tomb, nothing was to be viewable by the public. Since the sarcophagus was too large, a exterior room was built around them and wrought iron fence was placed in front of it. Behind the fence, you can make out the Seal of the President.  Mrs. Washington is on the left of the General and the family is sealed in behind them.
There are a few stones around the outside of the tomb, I will try to get some of those up on another day.
What I did not know while we were visiting is that there is a wooded hill which is a slave burial ground that is marked by a memorial to honor all African-American slaves who worked at Mount Vernon. I wish I had done just a little bit of reading before we made this trip so that I could have paid my respects there as well.
If you ever have a chance to make it to the East Coast, I definitely recommend a visit to Mount Vernon. 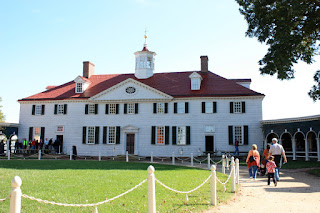