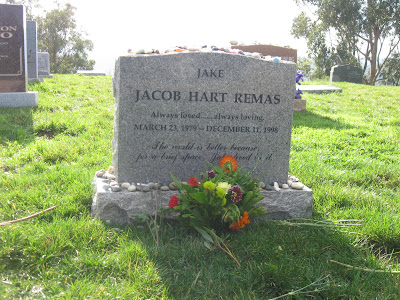 In Jewish sections of cemeteries you often see stones left on the markers signifying their visit to a loved ones grave. Here you see that many people have visited this grave or possibly one person grieving over and over. Sometimes you'll see a plain stone that looks like it was found on the ground at the cemetery but other times you'll see special stones or stones of different colors that have been left behind as well. This one also has a traditional floral arrangement that we're all used to seeing. Once in awhile I'll pick a stone up that looks like it has fallen off the grave and place it back atop. I wonder if it's just a random stone or just one that has been blown off by the wind. 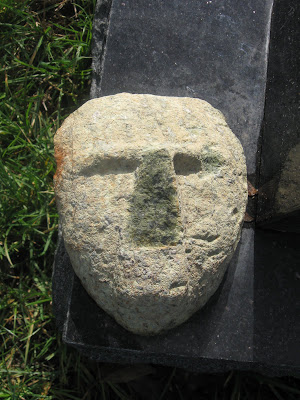 In this picture I found what appeared to be a mask that was left behind. I wasn't actually sure if it was a mask or not or if I should even call it a mask. It appeared to have a human like face so I'll go with a mask for lack of better explanation. It may be that the weather created it or that someone actually took the time to carve out some eyes. Either way an interesting find. 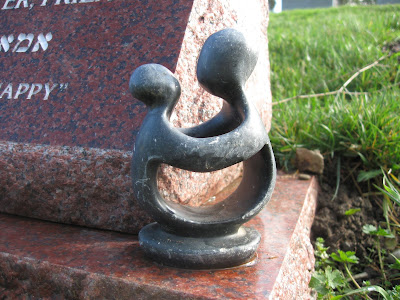 This is also from the Jewish section. I loved this statue and if it wasn't sitting on someone's grave it would be sitting on the mantle of my fireplace. It was forever chiseled into an eternal embrace. It was also smooth to the touch. A great piece of art. 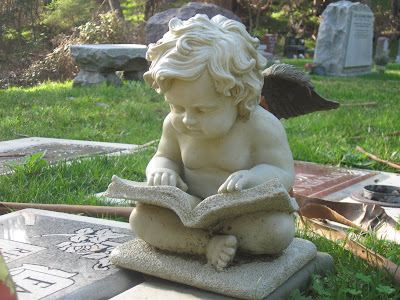 If it was acceptable for men to use the word cute it would definitely describe this small statue. I really like the small statues people leave behind. Just little reminders that didn't cost thousands of dollars yet still make a statement. This one seemed so focused on the book that it made me think the person buried may have been an avid reader. Great little angel that I was happy to see. 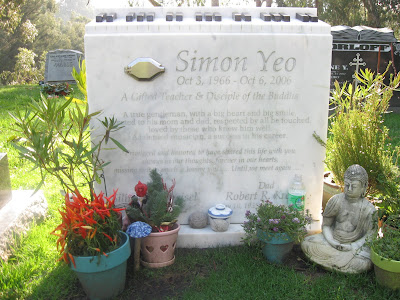 Not only could this marker been worthy of it's own post with the piano keys on the top but a great representation of other things left behind. The statue on the right was great. They had live plants, a bottle of water, and even a stone. So basically all bases were covered on this one. I've seen tons of things from little cars for kids, fake flowers, real flowers. toys, balls, skulls and even a box of cheez-its that really filled me up while I was skipping lunch. I'm kidding about eating the cheez-its of course but I'm a sucker for some cheez-its. A lesser man may have eaten them.
Posted by Joe Dallmann at Tuesday, February 02, 2010