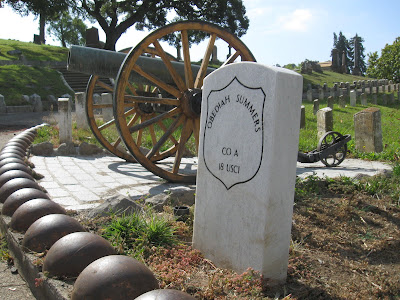 Born a slave in 1844 Obediah Summers worked as a servant for a top soldier in the Confederate Army and in 1862 was captured by the Union. The Union forces gave Obediah a choice. Fight for the Grand Army of the Republic (a part of the Union Army) or return to the south and remain a slave. Obediah made the wise decision of joining Company A of the 18th Regiment of the United States Colored Forces. After his discharge in 1866 Obediah became a preacher at the African Methodist Episcopal Church. Around 1891 he decided to build his own church The Old Bethel Church on 15th Street in Oakland, CA. About the same time he was appointed the first African-American chaplain of the state legislature. No doubt a huge step for a man of color given the time period. 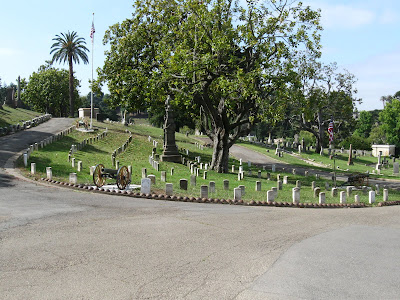 Today Obediah has a marker in the Grand Army of the Republic plot in Oakland's Mountain View Cemetery. But it wasn't always like that. You see up until 2005 Obediah Summers was buried in the unendowed section of Mountain View Cemetery. It wasn't until a docent by the name of Dennis Evanosky, who happens to be the Civil War plot expert at the cemetery, discovered the location of Summers body that procedures to remove and re-inter Summers' body began to take place. Since it was not a national cemetery permission was not needed to remove Summers' body, however it was discovered that he was also buried with an infant grandson which halted the procedures. Evanosky would have to seek permission from the city of Alameda before proceeding with efforts. Since Evanosky was neither family nor did he have to resources to hire a lawyer. He was able to locate Summers' great grand-daughter Myrnna Adams. After 2 years of efforts petitioning the cemetery Summers remained buried in the undendowed section. Adams has become too tired of the fight and the only thing Evanosky could do is have Summers memorialized in the section he belongs in. Summers was also a member of the Masons and Odd Fellows in his lifetime as well as other organizations.