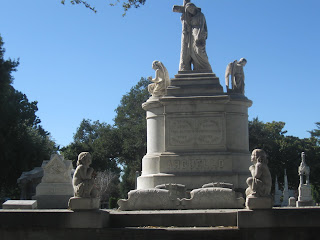 So you're probably wondering just like I was. What's a Ma. S. O. de Arguello? Well after about an hour of research and several different Google searches I finally found out. Maria Soledad Ortega de Arguello. I see a lot of abbreviations for names on gravestones or in this case monuments but without the power of the internet I may have never figured this one out. Maria was the grand daughter of Sgt. Ortega of the Portola Expedition which was Spain's first attempt to explore Alta California and allegedly the first European to see the San Francisco Bay. At the age of 25 in 1822 she married Luis Antonio Arguello and married into one of the most influential families in early California History. Luis succeeded his father as governor of California and became the first native of Alta California to serve as governor under the rule of 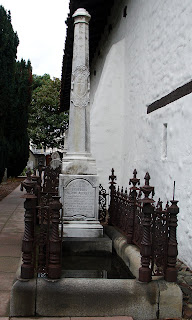 the Mexican government and the first native of California to hold that position. Luis never lived on Rancho de las Pulgas but his family moved there after his death in 1830. Rancho de las Pulgas has now become 5 cities in Northern California. It now forms the cities of San Mateo, Belmont, San Carlos, Redwood City, Atherton and Menlo Park.

I found it interesting that Maria is buried at Santa Clara mission cemetery while Luis is buried at Mission Dolores in San Francisco. I searched through my pictures and happened to have a picture of Luis' grave from when I visited Mission Dolores for a school project on missions for my girlfriend's daughter. I had no idea at the time that I would one day be able to connect him to someone else. With most of my earlier pictures I wasn't as interested in the history behind who was buried as I was the marker itself. I now find myself saying "I need to go back there and get more information." I'm just glad I keep my photos organized enough to be able to go back and see if I have that one crucial link...
Posted by Joe Dallmann at Sunday, November 29, 2009