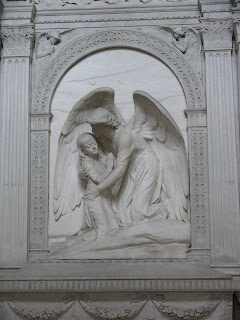 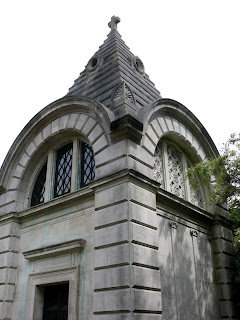 The mausoleum with a pyramid top in Highgate cemetery, London is that of Julius Beer (1836-1880.) Beer was born into poverty in Frankfurt and determined to make his fortune. He dealt on the London Stock Exchange and became proprietor of The Observer newspaper. However, being Jewish and a foreigner and having earned his wealth by commercial success rather than inheritance, he always felt ostracised by Victorian high society.
The mausoleum was built by Italian craftsmen and cost £5000 then, £2-£3 million in today's terms. At 1000ft above sea level, the mausoleum looms over most of Highgate's residents. Inside, the newly restored sculpture is of his daughter Ada. The likeness of the little girl being comforted by an angel was copied from her death mask when Ada died as a child. The ceiling is decorated with gold leaf. It took three months to restore the monument in recent years at a cost of £42K. The interior of the mausoleum is not normally open to visitors.