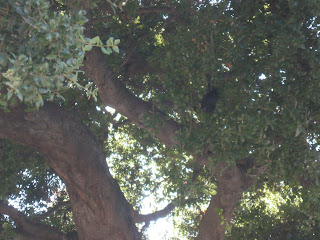 This weeks thing happens to be an upside down crow. As I happened upon it at Santa Clara Mission Cemetery it appeared to be stuck on a branch struggling to free itself. Being in no mood to climb a tree I stood there and watched for a couple minutes as it tried to free itself. When it finally broke free it swooped right above my head as if to say "Hey jerk can't you put down the camera for a second and help me out?". I often see crows in cemeteries and a few times I've followed them as they randomly travel from grave to grave just to see if it brings me anywhere interesting. So far, unless I'm missing some sort of message from beyond my following them hasn't led me anywhere. I did do a little research today to see what the crow symbolizes. So I began looking into Bird Mythology and have uncovered several different beliefs.

A number of Native American Tribes believed that the crow was able to see past, present and future all at once with it's far seeing eye.

The Greeks believed that the crow was a sign of impending death and therefore saw it as unlucky. They were sacred to Athena but she still would not permit them to land on the roof of the Acropolis.

In China a 3 legged crow is said to live in the sun with his 3 legs representing morning, noon and night.

Medieval Christians believed that the crow was a sign of the devil due to it's scavenging as well as a symbol of fidelity because they thought that when the crow's partner died that it would never seek a new mate.

I could not find any information on what if anything an upside down crow symbolizes. I can tell you that if you encounter one that's high in a tree that you either attempt to help it by climbing the tree or it'll buzz by your head on it's way down. That's only if it can figure out how to free itself before you become bored watching it hang there...
Posted by Joe Dallmann at Thursday, November 12, 2009