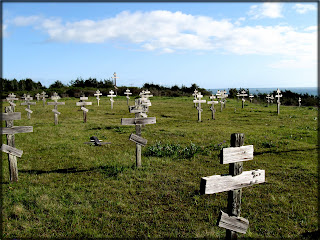 I decided to take my girlfriend with me on a job inspection the other day that was about 4 hours away from my house. It was up the California coast and instead of being bored by myself for 4 hours I figured why not have some company? So I brought my girlfriend along for the trip. As we were on our way up the windy coastal road she's looking at the scenery left and right and says "Hey did you see that cross over there?" I was trying not to drive off the cliff so I didn't see what she was talking about right away. As I got a little further down up the hill I saw an old cemetery on the side of the road. I had been up here a few times and never noticed it...mostly because I was driving. On our way back we decided to see if we could figure out how to get in. Driving slowly by it we saw a spot to pull off the side of the road and from there it was just a matter of walking right in. There was not much to see except for a number of Russian Orthodox crosses in the ground. 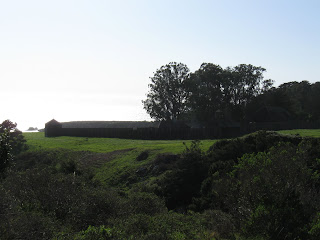 It wasn't until I got home and looked it up that I realized what we had seen.

Fort Ross was the southernmost establishment of Russia between 1812 and 1841. In 1809 Ivan Kuskov sailed into what we call Bodega Bay and returned with beaver skins and over 1000 otter pelts. It was then ordered that an establishment be made in this area. It's name derives from the Russian "Rus" but much like every other foreign word that enters the English language we assumed they were saying Ross. The fort was also used as a central hub between Alta California and Alaska to get supplies to smaller bases along the coast to Alaska . The colony consisted of Russians, Aleuts and what they called Creoles (the product of Russian men and Alaskan or other Native women). 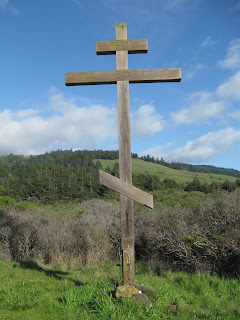 The cemetery was excavated in the early 90's as a research project to determine how well Russian Orthodox customs could be followed given the multiple ethnicities and beliefs that were found to be active there at the time. They also discovered that there were 131 graves. This is about 80 more than previously thought. Many of the crosses had likely deteriorated over the years and could not be accounted for. Although there are accounts of some Europeans being buried with a box over their grave none of these exist. The only think still standing are several of the Russian Orthodox crosses and a large one seen in the picture at the head of the cemetery. All of the graves face east as dictated by the Russian Orthodox canon.

Sometimes I feel like I get more out of a cemetery like this than the ones on a grand scale. The scenery and the history sometimes outweigh the art. Just over the hill to the right the Pacific Ocean beats against the rocks. Although there was not much to see here I could have stayed their all day listening to the waves beating the shore and feeling the cool ocean breeze...
Posted by Joe Dallmann at Sunday, March 07, 2010