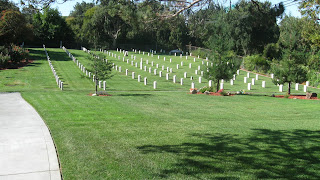 Before I get into this post I just need to say one thing. Moving stinks and it's great to be back...

I came across Benicia Military Cemetery as I was on my way to show my friend the Clock Tower or Stone Fortress which I'll get to later in this post. The cemetery was established in 1849 and is the oldest military cemetery in the Pacific Northwest. It is the final resting place of 211 people. Included are 123 U.S. Soldiers, 9 German and Italian POWs, 61 civilians of which 18 are unknown and 3 pets. Somehow my camera ate the picture of the 3 pets. I was talking to my boss who was in the military and he said when people first started using dogs nobody wanted to be around the dog. It wasn't until they realized that the dogs could smell the enemy coming a while before a human could detect it that people almost begged the dog handler to be around them. I guess they figured it was better to smell a stinky dog than get killed. That's about the way I would see it too. 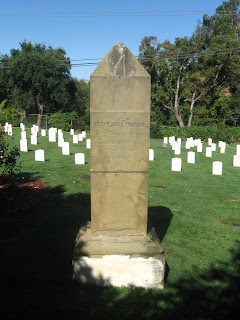 Lt. Colonel James Mason is the highest ranking individual who is buried here. He was appointed Superintending Engineer for the defenses of the Golden Gate, however he caught yellow fever and died at the age of 36 in 1853. Now that I think of it he must have been a very special soldier to have arisen to such a high rank at a young age. I think in those days you were appointed rank not only on accomplishment but by whether or not your superior was able to stay alive. In other words you had your job until you died or they found somebody better. (before someone says anything I need to give credit for that line to Starship Troopers very poor acting but still an entertaining movie). One thing that struck me about this cemetery is that the stones were all uniform and lined up in rows probably similar to what you'd find if these soldiers were all standing at attention waiting for orders. I will now follow this post with a few pictures of Benicia's rich military history...again it's great to be back 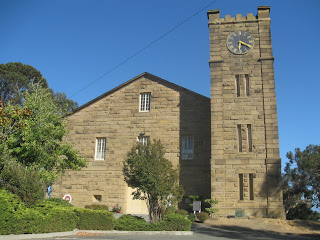 This is what's known as the Clock Tower or what I call the Stone Fortress. It was the first stone fortress built in the far west and for many this was the last thing they saw before going overseas to fight in the war. It was originally built with two towers but was partially destroyed in an accidental explosion in 1912 and was rebuilt with only one. 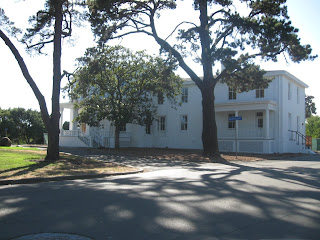 This was the Commandant's Quarters. It was built in 1860 by Col. Julian McAllister. The leaf work around the pillars and outside of the building was amazing. Apparently inside they have 14 foot high ceilings and 24 inch thick brick walls. The building is currently undergoing renovations and there was no way to go in even though I really wanted to. 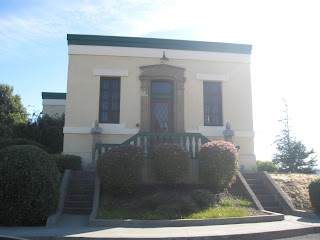 This is known as "The third guard house" There isn't a whole lot of information on it other than that. Apparently there used to be a couple earlier guard houses in the area. One of which held a trial for Ulysses S. Grant on a minor offense. This particular building was built in 1872 some 20 years after the first one was built.
Posted by Joe Dallmann at Sunday, October 18, 2009