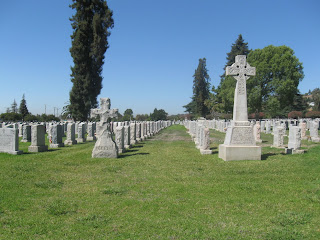 On one of my many lunchtime excursions I had the opportunity to visit Holy Sepulchre Cemetery in Hayward, California. This cemetery was established in 1913 for the burial of Catholics in Hayward and surrounding cities. Upon entering what struck me most about this cemetery was it's extreme organization of tombstones. I was discussing this with Cheryl over at The Graveyard Rabbit of South Alameda County and we both agreed that it appears to have been laid out with a laser. It seemed to me like every tombstone formed a near perfect line. In my opinion it took away from the character of the cemetery itself. I always complain that cemeteries are never well kept. This one is at the extreme opposite of such. I thought it was too well kept. I guess I'll never be happy. It was strange that I didn't immediately notice the large cathedral style mausoleum as I entered. 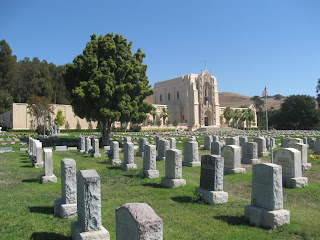 Initially I thought it was a large church. As I got closer I realized that it was not a church but a beautifully decorated gothic style building. At least it appeared gothic to me. Just like it appears I need to brush up on my architecture. It is fittingly called "The Mausoleum of the Apostles" named as such because on the front it has a large statue of each Apostle with Jesus front and center with his arms stretche 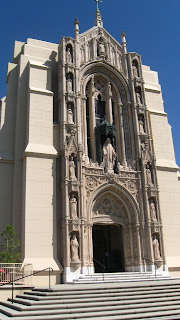 d out welcoming everyone in. I sometimes take my curious co-worker with me as I visit some of the cemeteries and I guess he figured that since Jesus was welcoming us that we should go in. So I immediately followed suit as he walked in like a kid in a candy store. I walked a little slower because I have learned to take my time because I don't like to miss anything. Even though I always seem to. I was still trying to take in the artwork I had just witnessed on the outside of this building. It was absolutely amazing and must have taken forever to complete. Working in construction I always try to figure out how they put things together. Or how they lifted something so heavy. I guess it goes with the business. I dont' think many construction workers do what I do as far as cemeteries go. Most of us just hope that we don't end up there sooner than we have to. One of the things I found most interesting inside was they had these benches that you kneel on to pay respects to your loved ones. 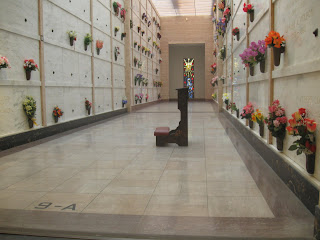 I'm not sure what they're called. But everytime I passed one I thought to myself how many people have probably knelt and grieved or prayed on these little benches. I began to sort of freak myself out to the point where when I'd see one I thought I could feel energy coming off of it. Everyone that knows me knows I don't believe in ghosts or anything like that but I have said before that I've felt things. Now even seeing this picture it is giving me a bit of anxiety just remembering the indescribable feeling that came over me that day. I don't know if it was emotion or residual energy left from the many loved ones that have knelt on these tiny benches for hours grieving over husbands, wives, mothers, fathers and children.
Posted by Joe Dallmann at Sunday, October 04, 2009