Can I just say first that it's good to be back? I've spent the last 3 days of my life in a place called Redding California. The city of Redding isn't too bad and there were a few cemeteries I wanted to visit but it was for work and I had no time. All I wanted to do was get home. Speaking of home I'll be moving over the next couple weeks so my posts may be a little sporadic. Luckily I have a couple more authors that seem to be doing a great job of keeping everyone entertained. 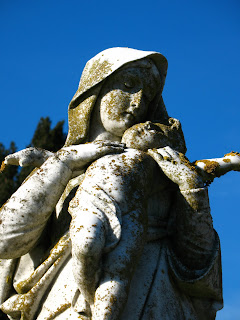 So here is this week's Freaky Friday. I did think this was a beautiful statue despite the baby appearing as if it were flailing around trying to get out of it's mother's arms. I don't seem to have a shot of them but I also remember thinking the baby's eyes looked sort of surprised or like it was in shock. It was nice picture though. This was taken at my second favorite cemetery, well so far, which is Cypress Lawn in Colma, CA. It some of the most impressive statues in California. I'm going to have to go there again once all my affairs are in order because it was early in my interest in cemeteries and the pictures taken were more of the statues than anything else and sometimes I like to know who is buried beneath these wonderfully artistic creations.
Posted by Joe Dallmann at Friday, October 02, 2009