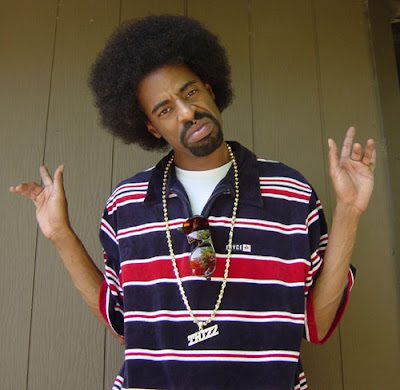 Bay Area hip hop legend Andre "Mac Dre" Hicks was born in Oakland, CA on July 5, 1970. At the age of 19 he released his first single "Too Hard for the F*ckin Radio". Between 1989 and 1991 Mac Dre was busy making a name for himself releasing 3 consecutive albums. By this time he'd moved to Vallejo California's Country Club Crest neighborhood or as it was called "The Crest". In 1992 Dre was charged with conspiracy to commit bank robbery when it was thought he had ties to the "Romper Room Gang" who had robbed several Bay Area banks. This was due to many references to the gang in his songs. This didn't stop Dre from working because while in prison he recorded the album Back N da Hood via prison phone. To hip hop fans in the Bay Area this album remains a classic. After his release from prison in 1996 Mac Dre immediately went back to work on his music releasing album after album of classic material. Then in 2000 Mac Dre relocated to Sacramento, CA and started the label Thizz Entertainment. Mac Dre was able to gain a huge following in the Bay Area and a few other cities and seemed content to just release the music he wanted to release and not be tied to the restrictions and rules of a major record label. Dre built his career on the underground music scene and still remains one of my favorite hip hop artists today. 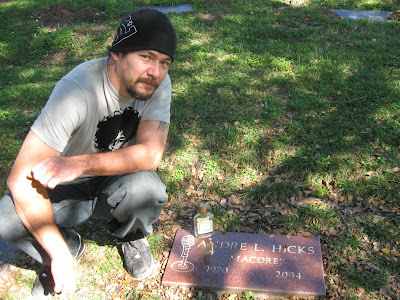 In 2004 while in Kansas City, MO a car pulled up next the the vehicle Mac Dre was riding in and opened fire. The vehicle swerved off the road and ran into a ravine where Dre was thrown from the vehicle. Autopsy reports determined that he was killed from a single gunshot wound to the neck. Nobody really knows who Mac Dre's killer was but a Kansas City rapper by the name of Anthony "Fat Tone" Watkins was believed by many to be involved. In 2005 Fat Tone was found murdered alongside Jermaine "Cowboy" Akins allegedly killed by a good friend of Dre in retaliation for Dre's death. He is now serving time for the crime. In 2006 Mac Dre's headstone was stolen a local rapper by the name of AP .9 put up a $10,000 reward for it's return. Obviously the headstone has been replaced but I'm not sure if it's the original or if sometime or somewhere somebody will try and sell it somewhere. For this reason the cemetery office will not disclose it's location. It took 4 trips Mountain View Cemetery before we found Mac Dre's gravesite searching through more than 8000 graves.

Although hip hop is often filled with violence Mac Dre seemed to stay away from that after his release from prison. The Bay Area hip hop scene was shocked and saddened by the death of one of the greatest Bay Area rappers to ever live. In my opinion Bay Area hip hop is now saturated with a bunch of people all doing the same thing...trying to be like Dre. Thizz Entertainment is still a label out here today but it's not the same without Dre. I don't know if my opinion is swayed by the lack of Mac Dre or if the hip hop scene out here is really saturated with rappers trying to be Mac Dre and still using his name to promote themselves.

On a side note I must credit my girlfriend with the find. I will not disclose the location out of respect for Mac Dre's family.
Posted by Joe Dallmann at Saturday, February 13, 2010