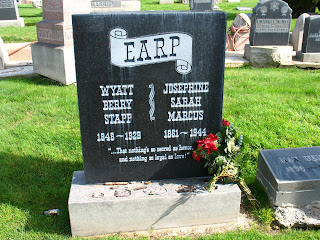 Wyatt Earp is buried with his common law wife Josephine Sarah Marcus in Hills of Eternity Cemetery Colma, CA. Originally I had planned this post to be a writeup on the life of Wyatt but as I was doing research I realized that Wikipedia has a very extensive and well done semi biography. (Click to read). So what you will have here instead is just my general observations. Sometimes when I hear someone famous is buried somewhere I get to the grave and say "That's it?" Expecting something on a monumental scale and then you get just a normal stone that anyone else would have just walked past. This happened to be one of them. Not that Wyatt was rich or anything. I guess it just seems that famous people are put on this pedestal no matter the extent of their fame so you think you're going to see something magnificent when you get there. What you see here is just what Wyatt was. A normal person that did extraordinary things. That lived a hard life in the Old West with gunfights, bars, saloons and the occasional arrest for being into prostitution. There have been several accounts of Wyatt's life in biographies and even Hollywood movies. Probably the best known and coincidentally sold in the office of Hills of Eternity is the Wyatt Earp starring Kevin Costner and Dennis Quaid. They also made Tombstone starring Kurt Russell and Val Kilmer in 1993. This list goes on and on but both were decent movies and worth watching some weekend when you have nothing better to do...
Posted by Joe Dallmann at Sunday, February 28, 2010