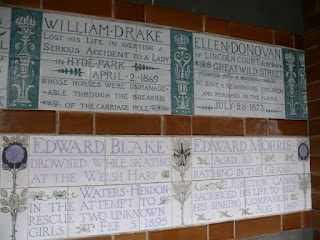 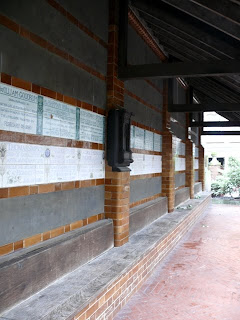 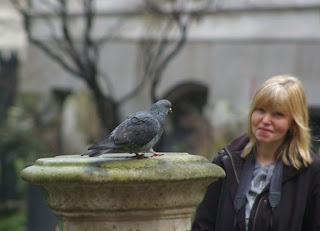 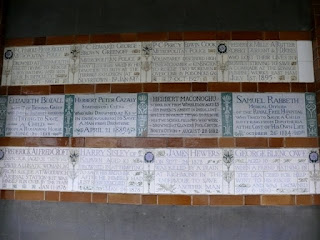 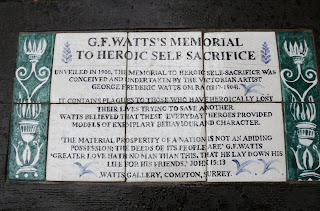 Postman’s Park is a small green space which is tucked away to the north of St Paul's Cathedral. Under the sheltered area is a wall commemorating ordinary people who lost their lives whilst trying to save others. In 1887 painter G F Watts (1817-1904), wrote to The Times proposing a project to mark Queen Victoria's Jubilee of that year. He believed that stories of heroism were uplifting and should therefore be commemorated. His idea was not taken up so he created the memorial himself in the form of a 50ft long open gallery situated in the public gardens on the site of the former churchyard of St Botolph, Aldersgate. On the southern boundary was the Post Office and many postmen spent their breaks there, hence the name by which it became known. Along the walls of the gallery Watts placed tablets of Doulton tile, each describing the acts of bravery that resulted in the loss of the hero or heroine's life and celebrates people who would perhaps otherwise have been forgotten.

Some of the inscriptions include:
Henry James Bristow aged eight - at Walthamstow on December 30 1890 - saved his little sister's life by tearing off her flaming clothes but caught fire himself and died of burns and shock.

Mary Rogers, stewardess of the Stella, Mar 30 1899. Self sacrificed by giving up her life belt and voluntarily going down with the sinking ship.

William Drake, lost his life in averting a serious accident to a lady in Hyde Park April 2 1869 whose horses were unmanageable through the breaking of the carriage pole.

John Clinton aged 10 who was drowned near London Bridge in trying to save a companion younger than himself. July 16 1894.

Joseph Andrew Ford aged 30, Metropolitan Fire Brigade. Saved six persons from a fire in Gray's Inn Road but in his last heroic act he was scorched to death. Oct 7 1871.

Thomas Griffin, fitter’s labourer April 12 1899. In a boiler explosion at a Battersea sugar refinery was fatally scalded in returning to search for his mate.