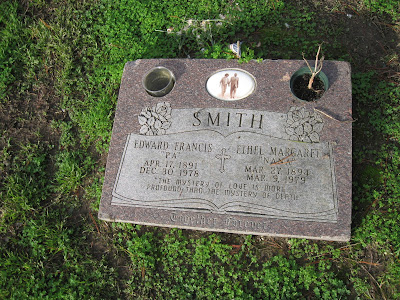 Today is a day you're supposed to celebrate your love for that special someone in your life. I'd like to take some time here to celebrate some love I found in the cemetery. Edward and Ethel Smith. What originally caught my attention was the epitaph "The Mystery of Love is more profound than the mystery of death". And then on the very bottom "Together Forever". That's something we say about ourselves and even other people all the time. "Oh they've been together for ever". So I did a little digging and although I can't pinpoint the exact marriage date I could tell that Edward and Ethel were married earlier than 1920 from census records and already had 3 children Francis, Melvin and Edward Jr. Which puts my estimate of being married in the neighborhood of 65-70 years.

Their marriage survived The Great Depression and two world wars. The death of Edward in December of 1978 was most likely more than Ethel could bear and she passed 3 months later in March of 1979. I would love to know more about this wonderful couple that no doubt after being together that long withstood anything and everything. Sadly Edward and Ethel can't tell me their story but there must be other people out there like them. Ones that give me hope that love can and does last forever. In some cases it's just not meant to be...or maybe it is and nobody knows until it's too late Happy Valentines Day Everyone.
Posted by Joe Dallmann at Sunday, February 14, 2010