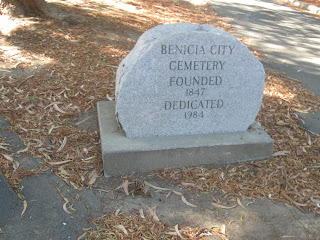 In 1846 while escorting General Mariano Vallejo to Sutter's Fort in Sacramento a gentleman by the name of
Lt. Robert Semple saw the Carquinez Strait. Most of the land north of the strait was owned by Vallejo and the two men came to an agreement that they would form a town here. In December of 1846 Semple was granted half interest in the land tract on the condition that he name the town after Vallejo's wife Francisca Benicia Carillo de Vallejo. Francisca was actually the original name of what we call Benicia today, however it conflicted with the more popular city of San Francisco. It was then decided that it would be called by Francisca's second name Benicia. In 1847 Semple sought the assistance of a prominent American settler by the name of Thomas O. Larkin which you may remember from the post on Cypress Lawn in Colma. 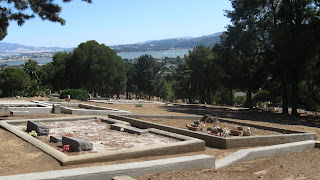 Established in 1847 just after Benicia became a town is Benicia's City Cemetery. Nestled on a hillside and overlooking the Carquinez Strait the cemetery is still in use over 150 years later. This is one of the few cemeteries I have been to that was established prior to California becoming a state. It was a hot yet beautiful day when I visited and I could see a sailboat race in the distance as I snapped a wide angle picture. I was playing with the settings on my camera and figured out that my camera had some capabilities that I wasn't aware of. When we set out this day it wasn't to visit Benicia at all. We were actually making our 3rd attempt to visit St. Catherine of Siena in Martinez only to be disappointed by the Martinez Police Department once again. We waited and waited for an officer to come to the police department where you have to pick up the keys and nobody ever came, although we did see at least 4 drive by the police station. So deciding not to lose the entire day we headed to Benicia. 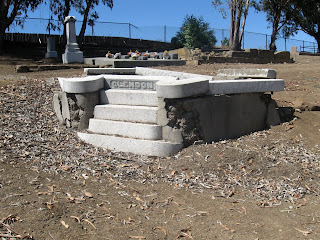 What I observed while visiting this cemetery was that many of the headstones and family plots in the older section have fallen into disrepair over the years. Most likely this was caused by erosion, neglect and as usual vandalism. Little by little things are being done here to help restore some of the plots in the older section. But for some, I'm afraid there will be nothing anybody can do but wonder what they used to look like. With so little history still available to us it's always disheartening when you see signs of vandalism in and on historic places. People need to be educated. Just a guess but I'd bet most kids these days couldn't even tell you when California became a state. It's disheartening. People often ask me why I bring my kids to cemeteries because they most people don't understand why I myself visit them. I simply tell them that I do this for the education, beauty and serenity. Of course bringing the kids sometimes diminishes the serenity I feel it's still necessary to educate them not only in school but in anything I can find around me. To close this post I'd like tot show some pics I got by playing around with the settings on my camera. 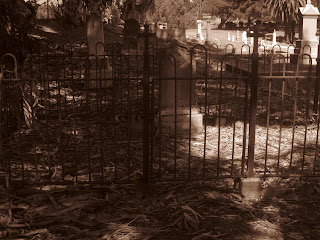 This shot was taken in a darkened sepia. I took it on manual mode and liked the sepia effect along with the shadows. I'm not a professional photographer of course so normally I'd take this into photoshop and doctor it. This time I chose to use it's raw format. 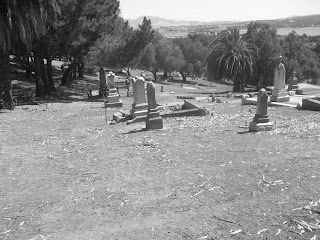 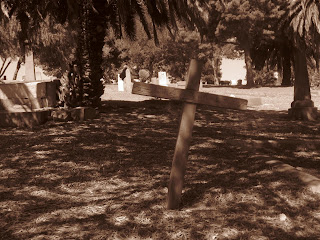 This is the last shot I'm going to post today. I probably took over a hundred pictures that day and this is probably my favorite one. It's another sepia. I like how it has an antique look.


I would like to thank everyone for reading my blog and giving me a reason to continue. If anyone would like to be a guest author and post anything about a cemetery, family member or anything else that may be related to this blog I'd like to encourage that. If you have your own blog it would be perfectly fine with me if you want to post something and plug your own blog in the process....until next time...
Posted by Joe Dallmann at Sunday, September 13, 2009