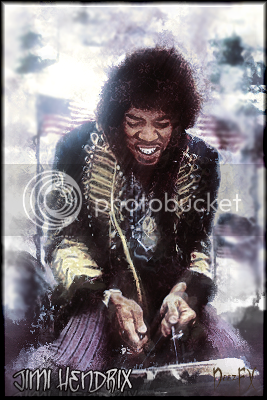 This is some artwork I did on a photo of Jimi Hendrix about a year ago now. Although Jimi lived and died before I was born his music still speaks to me today. Having a short career and short life he was able to transform music and I believe he was in fact way ahead of his time but somehow able to reach so many. For those of you that haven't seen how powerful and passionate his set was at Woodstock shortly before he died you are truly missing out. Jimi's music has gotten me through so many things in my life and I can always find a song that goes with my mood.

Jimi lived a short difficult life. His mother had him when she was only 17 and had a difficult time with Jimi's father Al. After Jimi's brothers Leon and Joseph were born Jimi's mother left his father and he only saw her here and there until her death in 1958. Jimi turned to music to give him an outlet. And thank God he did because I feel like in a few short years he was able to bring awareness to the world. Sadly Jimi died at the age of 27 years old on September 18, 1970, 39 years today of drug related complications. Jimi's music is timeless and will continue to influence and speak to generations to come. His music will always live on even though Jimi himself will not. I hope to be able to visit Jimi's gravesite in Greenwood Memorial Park in Renton, WA and pay my respects to the legend.
Posted by Joe Dallmann at Friday, September 18, 2009