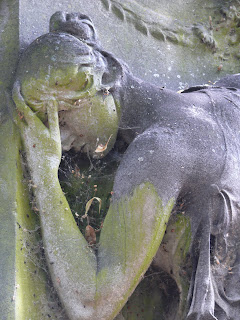 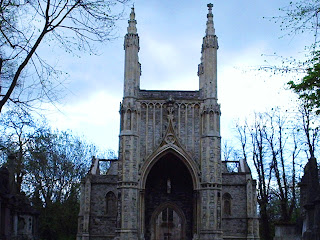 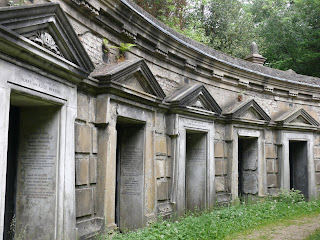 Top: Kensal Green. Middle: Nunhead. Bottom: Highgate.
By the middle of the 19th century London was running out of burial space. In 1832 a bill was passed that encouraged the providing of more burial grounds outside the city of London. The cemeteries in were all built over the following nine years: Kensal Green (1832); West Norwood (1837); Highgate (1839); Brompton (1840); and Abney Park (1840), Nunhead (1840) and Tower Hamlets (1841.) Unlike churchyards, these cemeteries were independent of a parish church, were located outside the city in what were then suburbs, and were privately run. These cemeteries became known as the 'Magnificent Seven cemeteries'.

Abney Park Cemetery, this cemetery extends over 32 acres on a slope running down from an ancient ridgeway track, now Stoke Newington Church Street, to the course of Hackney Brook.
Nunhead Cemetery 52-acre cemetery, the first burial was Charles Abbott, a 101-year-old Ipswich grocer and the last, a volunteer soldier who became a Canon of Lahore Cathedral.
West Norwood Cemetery has 64 Grade II and Grade II* listed monuments.
Kensal Green Cemetery is London's oldest public burial ground. The cemetery was founded by barrister, George Frederick Carden (1798 - 1874). He had seen Pere-Lachaise cemetery on a visit to Paris and was so impressed that he wanted to produce an English version.
Highgate Cemetery is probably most famous for its bust of Karl Marx. Highgate is considered by many to be the finest of London's 'Magnificent Seven' for its Victorian funerary architecture and landscaping. There are over 168,000 people buried in more than 52,00 graves.

Tower Hamlets Cemetery originally called The City of London and Tower Hamlets Cemetery, was opened by a company of the same name, comprising 11 wealthy directors whose occupations reflect the industries of the day. They were corn merchants, merchant ship brokers, a ship owner, timber merchant and Lord Mayor of London.

Brompton Cemetery was designed by Benjamin Baud containing over 35,000 monuments, many of historical importance. It also has amazing catacombs.
More photos at www.homestead.com/askjeane