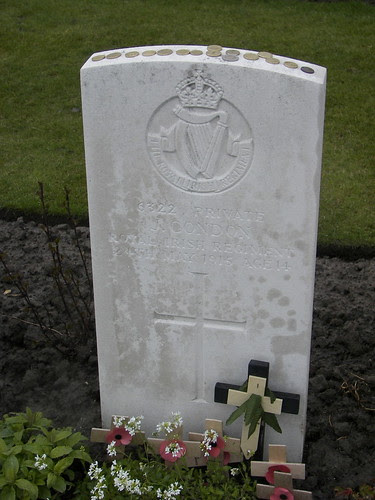 
He fell in a field

of honour and under a leaden sky

May nineteen fifteen and more

he has never seen.


There was a leaf

torn from the calender


And on his lips was the name

of his mother, his brother


who fell in another

The grave of "John Condon, age 14", the youngest soldier to be killed in the Great War, is reputedly the most visited grave of the entire Western Front. According to recent investigations however, John Condon was not age 14, but age 18 when he was killed in May 1915, after only two months on the Western Front,  in a German gas attack at a place called "Mouse Trap", near Ypres. The  two unknown British soldiers exhumed in 1923, were misidentified as the privates Condon and Carthy. The true identity of the man buried in  the grave marked "John Condon" is probably rifleman Patrick Fitzsimmons of the 2nd Royal Irish Rifles.